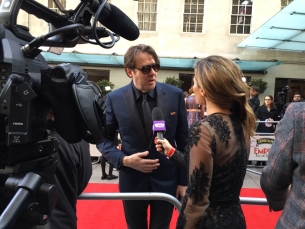 The best films and filmmakers of the past year, as voted for by readers of Empire magazine and film fans around the globe, were honoured last night at the 20th Jameson Empire Awards.

The big winner of the evening, taking the awards for Best Director, sponsored by Air New Zealand, and Best Film, presented by Viber, was Interstellar, whose director Christopher Nolan was also honoured with the prestigious Empire Inspiration award, presented to him by Interstellar actress and two-time Oscar nominee Jessica Chastain

Viber users were given VIP access to the Jameson Empire awards last night, as breaking news from the ceremony and back stage was revealed in real-time, live on Viber Public Chats.

TV host Zoe Hardman was on presenting duties for Viber, quizzing everyone from James McAvoy to Jessica Chastain on the red carpet, as well as a very special chat with Best Actor winner Andy Serkis who reprised his best Gollum voice for Viber fans. ’So excited to be part of the @Viber red carpet team for the #JamesonEmpireAwards today! Hope I don’t get too wet’, she posted on Twitter.

Viber’s crew captured photos and video from the red carpet and chatted behind-the-scenes with some of the night’s biggest stars including Andy Serkis, winner of the Best Actor award.

There was also live reporting from Empire Magazine in their own Viber Public Chat. The chat features discussions and analysis about the latest in movies from Empire’s editorial team, providing an insider’s view into the world of film.