Trends and Insight 524 Add to collection 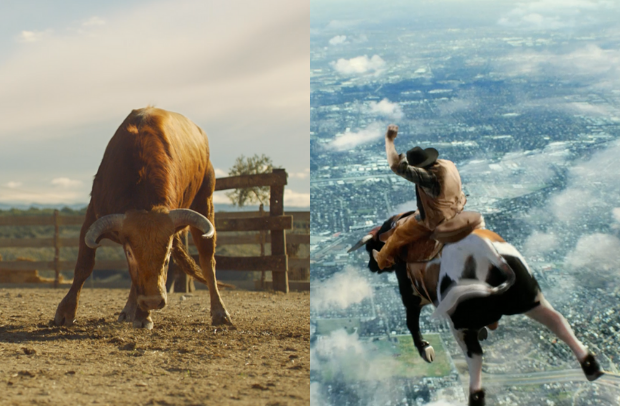 Post-production has always been tasked with producing against-the-odds creations and whilst the mandate is a technically complex one, it’s also inspired creative workarounds that have surmounted expectations, with logistically feasible, imagination-stretching solutions coming to the fore.
Gramercy Park Studios’ VFX Department, headed up by Mark Beardall, brings imagination to life - seamlessly blending the fantastic with the functional, creating the worlds of our wildest dreams. Through the combination of in-camera, 2D and CGI elements, Mark and his team have created worlds from scorching deserts to people-packed stadiums; from celestial skies to airplanes complete with bullpens.
In this interview, we chatted with Mark about how exactly this was all possible and why bespoke solutions for 2D could be the difference between an idea that sinks or swims.
For those outside of the VFX world, discerning what characters, settings and expertise you need to create a legitimate environment is no easy feat. Contrary to the common phrase ‘fix it in post,’ it can be too late to wait until after the production process has wrapped to make the important decisions on what more is needed. You may know you need a T-Rex, but shooting Jurassic Park is a whole new ball game.
So, we asked expert Mark for some clarity on what exactly a 2D environment is: “A 2D environment covers the range of environments we work on,” he explains. “And what we’d classify as an environment is incredibly varied. Fundamentally, it’s a range of work, from simple set extensions to a fully customised and built internal or external environment and world.”
Mark continues: “There are a couple reasons we would choose building a 2D environment versus shooting it in real life - all mostly to do with budgetary and physical limitations. An easy example would be a stadium environment, where the logistics of filming in an existing structure may be difficult to overcome, and it will need to be either partially or entirely built from scratch in post.”
One example of an environment filled with the ‘ordinary’ and the ‘exceptional’ is Betfair’s ‘This is Play’ campaign - replete with paddle swinging octopus. The ad featured a stadium in which one octopus battled players across multiple ping-pong tables, able to thwack back the balls with spooky slippery precision.

Production wise, Mark and the team knew that the octopus would need to be a CG creation but that the stadium would also require building - largely due to the scale and proportions needed to realistically execute the ad.

“There wasn’t a stadium appropriate for the slightly alternative reality we were creating,” explains Mark. “We built and populated the entire stadium in Flame using some bespoke geometry pieces from 3D, so that manipulating it would still be interactive. We agreed from the start that the stadium would be predominantly dark with only a few pools of light. Decisions like this often decide how best an environment should be built - in this case, it meant that the desired effect could be achieved in 2D as the eye-catching action would be happening in front of the stadium background.”

How these environments come to life is deeply ingrained in the production process, despite being a post-production capability. For Mark and the team, the first glimpses of what will be necessary in post, often comes with the script and director’s treatments from the production team. Once these initial insights are delivered, meetings with the agency, production company and director can be organised to find the best way to shoot the script and what VFX requirements will be needed on set and in post.

“There are always limitations to be understood when working with environments that will require digital creation or extension - recognising how far the camera can be moved before the illusion falls apart for example,” says Mark. “It is essential to communicate these limitations to the client from the outset.”

For Heinz’s ‘Bull’s-Eye’ campaign Mark combined disciplines to transform the spot - originally filmed on a farm in Madrid - to look as if it was set on an American style desert. Costly and logistically prohibitive to film the spot on location in America, Mark worked with a bank of images of U.S. deserts and mountain ranges to create a convincing 2D environment in post, blending environments both real and extended.

“Environments often work best if they are at least based on photos and real world references. They also work better if there are elements from the shoot incorporated so there’s something to match and lock on to,” advises Mark. “So, whilst we primarily based the environment for Heinz’s bull on photos, they were all cut-out and re-arranged in 3D space using geometries and projections onto them. Our CG department modelled a fence and provided us with it so that we could import it into our 2D environment. We matched the camera moves from the original Bull and then rotoscoped him out onto our new backgrounds, using lighting effects and atmosphere to blend everything together.”

As with all creative processes, there are challenges, especially when requirements change and goalposts move. But, as production techniques and VFX technology improves, artists are afforded more flexibility, including their ability to adapt which tools they use. The introduction of image based lighting and physically based rendering has improved the process of creating convincing environments - down to small tweaks such as replacing a floor or patching a wall.

Complex 2D builds, such as creating a bucking bronco that jumps out of a military plane, are fertile ground to test the newer tools and really dig into the wider technical capabilities. When Mark was tasked with Nestle’s Butterfinger Super Bowl TVC, he worked to overlay as much realism as possible to a highly unrealistic situation.

“From the moment the bull jumped from the plane, we knew it needed to be a computer generated bull that the man was riding. The plane exterior was also computer-generated but the interior shots were a production build. Initially, when we were on set, it all looked great, but once we started work, we realised that the interior didn’t look enough like a real plane - so a large amount was rebuilt and resurfaced in Flame. Cargo doors were modelled, wall controls and a new cargo plane floor were built to help bring the shots to life,” Mark recalls.

So, there we have it - a crash course in building 2D environments and the benefits to a budget-squeezed yet imagination-rich industry - for the 2D layperson or curious producer, who perhaps has an inkling that bulls don’t skydive.

- From a post production point of view, budget and time play an important part in the achievability and believability of the world and the concept as a whole.

- Shoot as many elements and gather as many real world references as you can.

- Communication throughout all stages of production is key.

- Creative projects change and evolve. Be aware of the effect this can have throughout the life of a production.

For more of Mark and his work with Gramercy Park Studios, please click here.