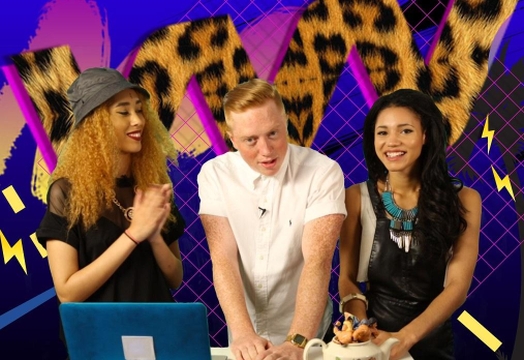 Vevo UK has launched its first ever presenter-led music programme, ‘VVV’ (pronounced ‘Triple V’). Sponsored by Toyota AYGO, the brand new programme takes a fresh-faced look at music videos, original shows and news from across Vevo three times a week, transmitting every Tuesday, Thursday and Friday for the next eight months.

’VVV’ is  hosted by three talented young presenters: Cheyenne Davide, Vick Hope and Ste Hinde, whose eclectic, light-hearted comedic presenting style embodies the spirit of Vevo UK whilst bringing a dynamic, engaging and fun, chaotic quality to the programme. ‘VVV’ is designed to be bright, bold and above all accessible, spanning the broad range of artists and genres available on Vevo.

The series will have three themed weekly episodes - ‘VVV’, ‘VVVision’ and ‘VVVintage’, all available on-demand across Vevo.com, Vevo’s free apps for smartphone, tablet and living room and via a host of syndication partners including YouTube, Yahoo!, AOL and Daily Motion.

Kicking off today, ‘VVV’ will transmit every Friday, bringing fans the biggest premieres, the best of Vevo's original programming, news, chat and much more.

On Tuesday, ‘VVVision’ will lead with a new music video from one of the hottest artists of the moment. The video will be linked to a further four videos, each of which connects to the artist in a different way. ‘VVVision’ will deliver all the need-to-know facts, making it the place to come for new music.

Every Thursday, viewers can tune in to ‘VVVintage,’ which will dive into Vevo’s extensive catalogue of over 100,000 official HD music videos. It will count the top five, based on a fun and irreverent theme each week – no matter how bizarre.

Delivering 101 episodes in its first official series, ‘VVV’ is one of the most ambitious programmes Vevo has produced to date. Designed to create a home that unifies all of Vevo original programming strands, official music videos and live concert footage, ‘VVV’ creates a place where music fans can access the very best new content from the world’s leading all-premium music video and entertainment platform. Following its sponsorship of another Vevo original series, ‘Lyric Lines’, Toyota AYGO will be the first series sponsor for ‘VVV’ taking full ownership of advertising around the programme with its Go Fun Yourself campaign.

Tom Connaughton, Vevo’s Vice President of Content & Programming, International, said: “We’re very proud to be launching ‘VVV’ in the UK today and to have Toyota AYGO as the sponsor from day one demonstrates the appeal of the programme. We really believe that now is the right time for a presenter-led programme which can bring a voice to Vevo and that allows us share the great programming we produce. Whether you’re coming home on the school bus or on your tea break at work, we want ‘VVV’ to be music fans go-to place for regular weekly music entertainment.”