Vespa Gets Back on the Road in New 'Vespizzatevi' Campaign

BBH London helps Vespa return to the slogan 'Vespizzatevi' for the first time since the ‘50s by personifying the little things people have missed the most, and showing them as a companion on the back of the scooter 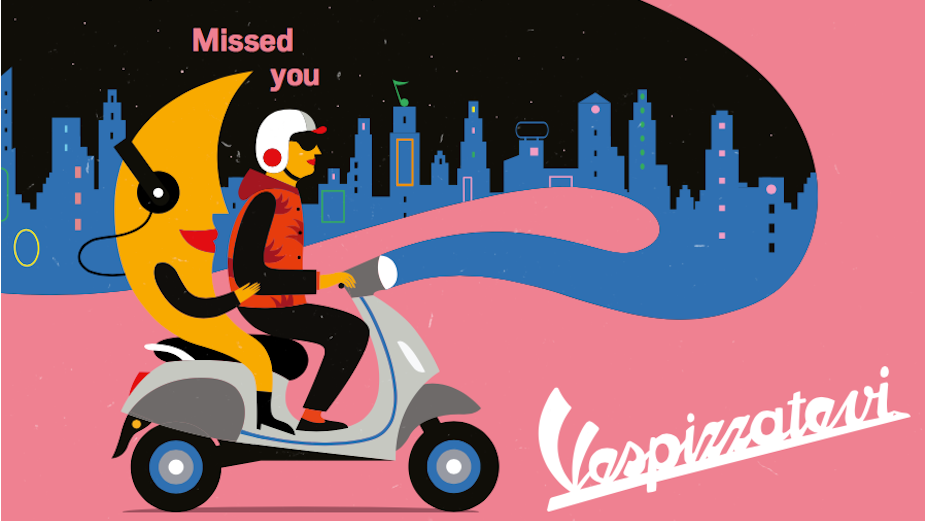 After a long hiatus, life is slowly starting to return to normality and lockdown is starting to be lifted in a number of countries. To celebrate this, Vespa have launched a campaign depicting the feeling of joy as we reunite with the things we’ve missed the most.
Vespa, the iconic Italian brand of scooter manufactured by Piaggio, has always stood for a sense of freedom, joy and spontaneity. Paying homage to Vespa’s post-war work of the 1950s, BBH London have created a series of illustrations to launch as lockdown restrictions began to ease across the world. Our social media listening revealed that with months in isolation, people were in fact missing and craving to go back to the little joys of everyday life.
The series, entitled ‘Together at Last’, celebrates the reunion between people and what they’ve missed during lockdown: riding to work in the sunshine, escaping the city, exploring our city’s culture or simply reuniting with friends. The campaign sees Vespa bring back the end-line 'Vespizzatevi' or ‘Let’s Vespa’ for the first time since the 1950s, post World War II. The tone of this idea captures the surrealism and pure joy
and positivity of the post war ads from the 50s. By personifying the little things we’ve missed the most, and showing them as a companion on the back of the scooter, Vespa is the catalyst for that happily ever after love story.
The campaign includes four executions, each commissioned by a separate illustrator; Paul Thurlby, Quentin Monge, Agustino Iacurci and Sebastien Curi. Each execution has its own style, but they are all colourful, playful and unequivocally Vespa. The campaign is launching in the UK, Italy and APAC in May, with illustrations being released in a phased approach to reflect the easing of lockdown. It will span across OOH, press and social
channels, as well as featuring in Piaggio Group’s own Museum in Pontedera.
Pablo González De La Peña, head of art at BBH London, said: "It’s such a special opportunity to put a global campaign out there now that restrictions have been lifted in some countries. People are finally free to conquer the outdoors again, and we're going to welcome them with buckets of energy and positivity. The iconic Vespa has been making our streets more colourful for 74 years. After these depressing times, it’s time to get
back to it, starting with these bright, bold posters,We have brought four of the most vibrant young illustrators to help us find the right tone for the
brand. Taking those classic posters from the 50’s and giving them a contemporary approach. Seeing them all together, they all feel unequivocally Vespa".
Davide Zanolini at Piaggio Group adds: “We thought it was the right moment to use the 'Vespizzatevi' concept now we need to start again approaching life and mobility with enthusiasm, joy and positive energy. It was not easy to reinterpret a campaign that made the history of communication in the early '50s. But with BBH it was done an excellent job to make the concept contemporary cool and again, while preserving the heritage of the original campaign.”
view more - Creative