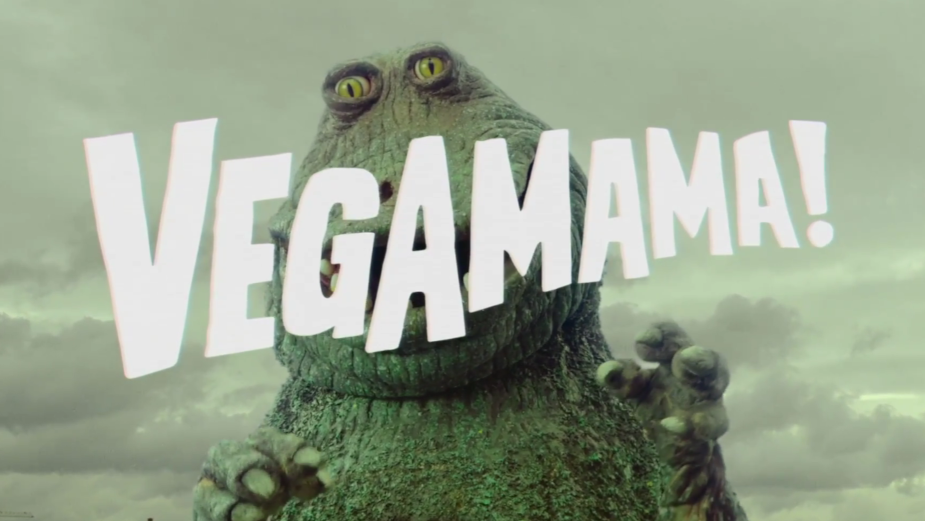 The planet is burning, the temperature is rising and Vegamama wants vengeance. Using the kaiju style of Japanese animation, the new wagamama campaign lets us know that we don’t have to destroy the planet and demand action, we can simply swap to vegan options. Sounds simple enough?
Directed by Vendran Rupic at Riff Raff Films and creative by Uncommon, the campaign for wagamama’s brand new, plant-based menu is quite something. Using animatronics, 3D modelling, foam and an amalgamation of many other techniques, the campaign achieves a cute, yet scary monster who has so much life behind her eyes - in keeping with the kaiju style. The Vegamama monster just wants to see us looking after the planet and wagamama provides exactly that.
To get an insight into the direction, behind the scenes animation and style of the campaign, director Vendran Rupic speaks to LBB’s Nisna Mahtani.

LBB> Tell us about wagamama’s initial brief and how you interpreted it?

Vedran> The brief was short and sweet: we were doing our own take on a kaiju - vegetarian and mad at humans for destroying his planet.
The idea was clear, so it made it easy for me to dive right in. I have a bunch of references of the golden age of cinema when all effects were practical and looked a bit questionable, so it was the ideal project. I just started looking through my archives and putting together an approach that I thought would work.

LBB> What was the initial idea for the project, who came up with it and how did it evolve into the final concept?

Vedran> The initial idea was that of a vegetarian kaiju wrecking human-made things that are destroying our planet. The fine people at Uncommon Creative Studio had already developed the idea when I first received it. I then added a sprinkling of small narrative elements and effects solutions to it, adding details as we went along.

LBB> Vegamama and her ‘kaiju’ inspiration make her both beastly and somehow adorable as a character. Can you talk us through the Kaiju anime genre and how Vegamama fits into it?

Vedran> We really wanted to make her look both cute, scary, and somewhat reluctant to even be doing any of this. I must confess, I'm no anime expert, so I'm not sure she would even fit into the anime world of kaiju. I don't even know what they eat.
We all really loved the aesthetics of the live-action films from the 50s, 60s and 70s. So we were inspired by characters from those films. Our Vegamama character is very determined but at the same time, very easily dissuaded. She is a reluctant protagonist, which I think most people would need to become in order to fix the environment. Heroes because they have to be, not because they want to be. 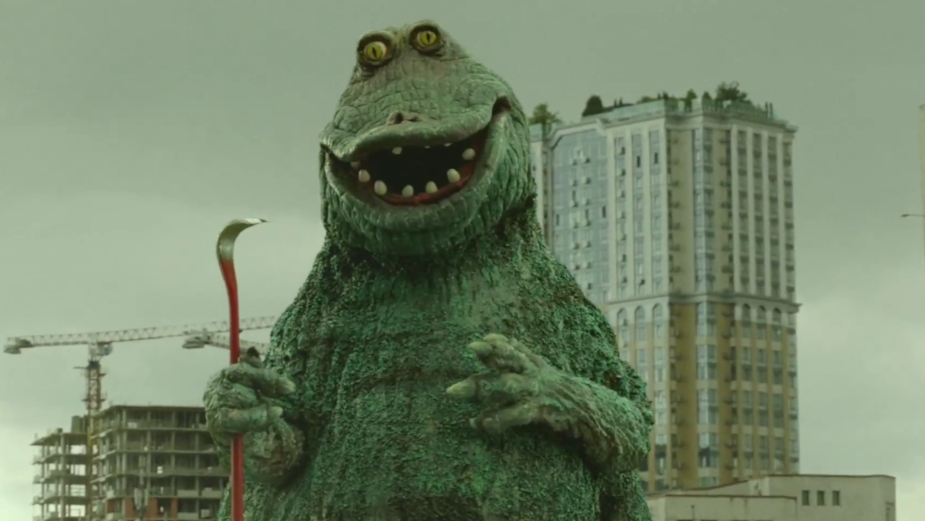 LBB> Speaking of the Japanese film genre, you say you took inspiration from the colour palette of 50’s-70’s cinematography. Why did you choose this style and how did you execute it?

Vedran> We wanted to stay true to the genre; some colours were saturated while some were muted, and in all honesty, it's a superior look. I'd have stuff look like that the whole time if people would let me. How things were shot then and how it was processed is so different from today.
Ideally, this would shoot on film, but given that most shots were VFX shots with a very fast turn-around, we had to opt for a different solution: shooting digital and working with a colourist who is well versed in film emulation. That approach works around 20% of the time. This was one of those.

LBB> The sound behind the ad is Gustav Jennefor’s intentionally mismatched musical composition which fits perfectly with the oddly charming nature of the piece. What was his brief and how did he come up with ‘Vegamama’s Theme’?

Vedran> We had a reference where a proper orchestra changed instruments with each other and then tried to play a legitimate piece of music. It served as inspiration, but Gustav is just so insanely talented and diverse, that he just makes everything really great. He is a true artist.
For every iterated version, he'd just receive feedback to have it sound more broken, and every time he figured out a new way to add a layer of brokenness to it.

LBB> The process of creating the Vegamama character involved 3D modelling, latex, foam and animatronics. For those that don’t have a VFX background, can you give us an idea of the process?

Vedran> I worked closely with a character developer/VFX-god/illustrator called Ulf Lunden in developing the character. I had some references, but he really found a way to incorporate the stuff I liked from each into a believable character. When we got the design approved, we started working with the very talented team at Fixas led by Niklas Hermansson. Those guys added their magic and brought it to life.
I have a deep respect and love for the art of animatronics, and there are few people who can do it as well as Niklas. He is not just incredibly good at building and programming them, he also operates them with insane precision and an impressive range of emotion. It just looks like magic when he does his thing.
When I saw the immense detail of Vegamama’s facial motions, I figured out that the lower-eye-lid-twitching would be her thing. That's when she came alive for me. She had the look of someone that just lost custody of her kids, didn’t sleep for a week and was running low on nicotine patches. 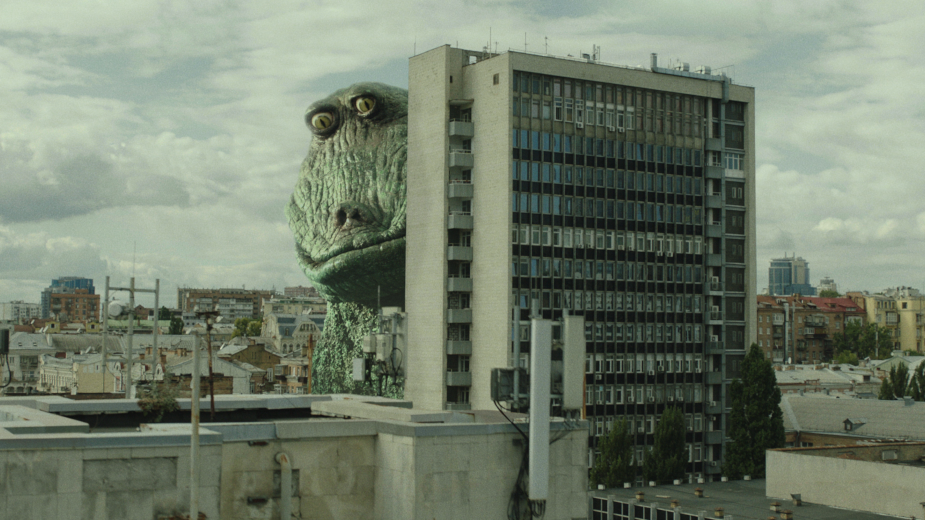 LBB> A lot of the ad would have come together during the post-production process. Can you talk us through the editing and colourisation that took place?

Vedran> This is one of those ads where the process can be generally quite taxing because we are very slowly iterating the film. The first draft is often underwhelming because there isn’t all that much to see. Then by the end, as we approach the finish line, you don’t get that exhilarating feeling of something ‘new’ when everything is put in place, because we’ve been chiselling away at it.
I have done a few of these before so I knew what to expect, but I can see it being an unnerving process. Luckily the team at Uncommon trusted us the whole way through, and when we did the colouring and sound design in the final steps, together, this breathed life into Vegamama and our/her world, re-igniting everyone’s initial anticipation to see it come to life.

LBB> Can you tell us about any behind the scenes moments that led to some laughs?

Vedran> I don’t remember the last time I had that much fun on a shoot. We shot in Kiev for the location stuff, and Gothenburg for the studio stuff. I can’t recall a single moment as being particularly funny. The whole shoot was just pure bliss.

LBB> What has the response to the ad been like and were you expecting it?

Vedran> It has been really good! I like how the film turned out but I never expect anything good to happen to me in my life. So no, I didn’t expect it.

Vedran> No, I think this is it. A big thanks to Radioaktivefilm in Kiev for being so nimble and solutions-oriented, and most of all, fun to work with!
view more - Behind the Work