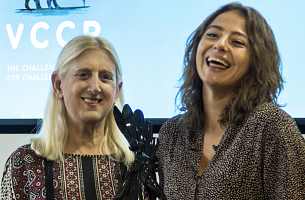 London International Awards has awarded VCCP art director Sadie Mayes with the Grand Prize for her work, which aims to help raise awareness and funds for Gorilla Doctors.

'Gorilla Issue Tissues' was chosen from more than 250 entries by the panel of judges comprising Dr. Mike Cranfield and Dr. Kirsten Gilardi of Gorilla Doctors together with top creatives; Bob Isherwood, Jeremy Craigen, Mark Tutssel, Anna Fawcett and Marcia Goddard. More than 90 attendees from the Creative LIAisons program were also invited to the judging process.

Research has shown that infectious diseases contracted from humans are the leading cause of death in mountain gorillas, accounting for more than 20% of mortality. The most common are respiratory infections, which can range from a mild cold to severe pneumonia.

It is hoped that the creative idea will be picked up by a brand to then be sold in supermarkets and pharmacies alongside cold and flu medication. Proceeds from the pack of tissues would go to helping Gorilla Doctors look after infected gorillas. ‘Kill a cold, save a gorilla’.

As well as the award, Sadie will receive an ecotour donated by Terra Incognito Ecotours for a once-in-a-lifetime trip to visit Rwanda, home to the critically endangered Mountain Gorillas. She will also receive a trip to attend the 2019 Creative LIAisons program.

Brett O'Connor, executive creative director, VCCP Health said: “We’ve been lucky enough to have won a few awards since we started VCCP Health but a Grand LIA for Sadie’s work on Gorilla Doctor's is one of our proudest achievements. It’s so lovely to see new creative talent coming through the agency and getting the recognition they deserve. A big thank you to Barbara Levy from LIA for flying over and presenting Sadie her award. Made the day even more special."

Marcia Goddard, president of McCann Health New Jersey added: “Issues tissues caught the eye of the judges because of its directness and simplicity. After speaking personally with the Gorilla Doctors group, it became clear the winning idea had to be easy to execute on a global scale, directly raise funds, and quickly make the connection to the plight of the gorillas. We saw a lot of great digital pieces and dramatic PR “stunts,” but nothing that hit the nail on the head as well as this idea. Well done to the winning team…it was an extremely tough competition!”

For more information on Gorilla Doctors and the competition, click here.