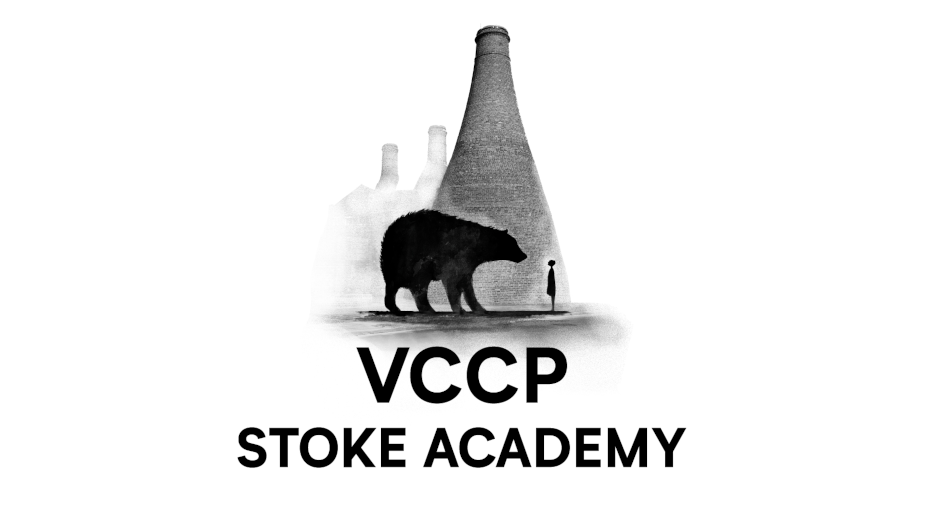 VCCP has today announced the opening of a new office in the birthplace of the British creative industry, Stoke-On-Trent. It becomes the agency’s first UK office outside London and reflects the challenger network’s ambition to open up and attract more diverse talent. In its initial phase, the office will function as an Academy with staff from VCCP London working to raise awareness, provide training, work experience, mentoring and paid internship schemes, with a future apprenticeship scheme set to launch next year.

Set against a backdrop of recent art colleges and advertising school closures, and a global pandemic which has exacerbated the situation, the pathway into the industry has become narrower with more and more opportunities being removed. People outside London are struggling to see advertising and media as a career option, especially those from low income areas or from diverse backgrounds.

Stoke has one of the highest rates of economic deprivation, especially amongst black, Asian and minority ethnic communities. Within the creative industry, cities like Stoke are often overlooked in favour of Manchester or Leeds when setting up outside the South East.

Open to people in Stoke and surrounding areas, VCCP Stoke Academy will tackle three major recruitment barriers faced by the industry which include a lack of awareness of the creative industry as a potential career option, a dearth of pathways into entry level jobs around the country and the extremely high cost of moving to and living in London where most entry level job opportunities are to be found. 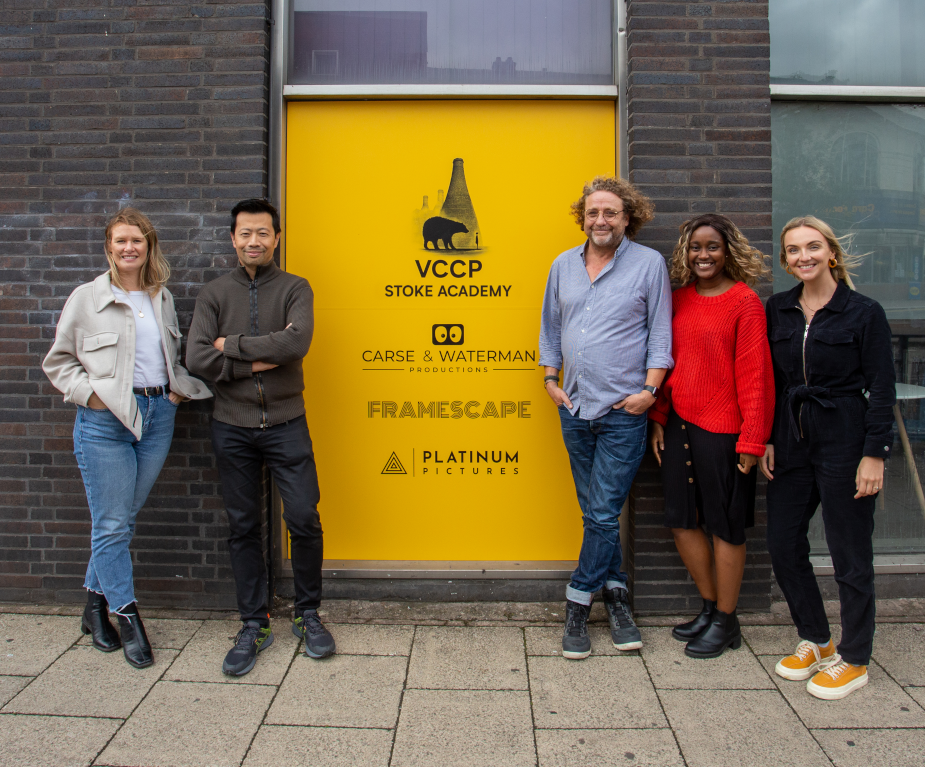 Chief strategy officer at VCCP, Michael Lee explained: “We’ve been concerned for some time about the increasingly narrow talent pool that we’re able to attract into an industry that we’re incredibly proud to belong to. Great creativity has always relied on being able to draw on a diverse group of people. Right now, because of the increasing socio-economic barriers to entry, we’re in danger of becoming quite a monocultural profession.

“We wanted to find a way to remove barriers for people to enter the industry. But it was clear that even if we could solve the awareness problem, cost was still a massive obstacle for the vast majority who don’t live in London and don’t have access to financial support from their families to be able to start on entry-level wages. The easiest way to solve both problems for all the prodigiously talented young people in Stoke who could and should be working in our industry, was to set up a local base.”

This summer VCCP trialled work experience programmes with Stoke Sixth Form College called The VCCP Stoke Student Challenge 2021 and set up partnerships with Stoke-based creative industry businesses and social enterprise initiatives. This work experience programme was run for sixth-formers at the City of Stoke-on-Trent Sixth Form College, Stoke’s largest sixth form college with over 1700 students. It was devised in partnership with Geoff Willis, Director of Teaching, Learning and Assessment, and Naomi Baxter, Teacher of Creative Media & CAP Futures Lead and was run by Luke Alexander-Gose and Kenny Dada at VCCP. 40 students formed nine teams to compete in a six-week pitch style competition designed to give them opportunities to develop their strategic, creative and presentation skills. Weekly check-ins enabled teams to benefit from guidance and mentoring from VCCP strategy, production and creative teams, with a final presentation session in which two winners were selected for the Best Creative Idea and Best Film. Students were also assigned mentors to help them in the project and to help them understand what future roles they could apply for within the creative industry.

Naomi Baxter, course leader at Stoke Sixth Form College said: "The VCCP Student Challenge enabled students to work collaboratively in researching, developing and creating an advertisement for a live brief. Students received excellent mentoring to guide their work and prepare them for a final pitch. The VCCP team challenged them to think bigger and aim higher with their work. The experience really helped widen their industry awareness and inspire their future career ambitions.”

Building on the success of the last 12 months, the Academy has set an ambitious target of engaging, inspiring and creating opportunities for more than 500 young people in the coming year. It will expand its successful Student Challenge over this academic year, adding two new local colleges: Stoke City College and Newcastle. VCCP Stoke Academy will also work with Staffordshire University to attract students into the summer internship programme based at their office space, whilst also giving guest lectures to students on Art & Design and Digital Production courses.

Alongside its education work, VCCP has also formed a partnership with Carse and Waterman, a local specialist in digital VFX and animation. Founded by two former Staffordshire University graduates, Gary Carse and Daniel Waterman, the animation agency works for eBay, Michelin and the BBC. VCCP Stoke Academy will now share office space with Carse and Waterman in a refurbished old NatWest Bank building a few yards away from the famous old Spode pottery works. In the next few months, VCCP Academy will welcome existing employees to work part-time or permanently from the VCCP office and run the outreach and training schemes.

In return, VCCP will support Carse & Waterman’s social enterprise called Framescape, a joint venture with filmmakers Platinum Pictures, headed up by Richard Turner and Terry Stone, Daniel Waterman of Carse and Waterman and post-production outfit Dreamscape Studios. Framescape aims to raise awareness of potential careers in VFX, animation and production amongst Stoke youngsters in exactly the same way the Stoke Academy will for Advertising Communications.

The Academy will also work with Eric Gresswell, founder of Popcorn Learning Media to design a bespoke Apprenticeship scheme which will be run at the VCCP Stoke Academy and which aims to hire people within the subsequent six months. Popcorn Learning Media Limited, is a multi-award-winning digital learning agency specialising in the creation of digital learning courses, filmed video and animation. Established in 2015, the company operates out of offices in Stoke-on-Trent and Southampton and they already offer apprenticeships in level 3 Team Leader and level five Management and Leadership.

VCCP Group already has a successful existing paid internship scheme, called The Table which is an annual yearlong scheme which recruits for entry-level roles in Account Management at VCCP London, Good Relations and Snap LDN. Working with Staffs University and Keele University, The Table will be replicated in Stoke to provide early career opportunities.

VCCP’s long-term ambition for the Academy is to convert it into a permanent office, which hires local staff, recruits from the early career schemes and also services local clients. Executive Creative Director at VCCP, Jim Thornton explained: “We’d love to be in a situation where we end up attracting other creative industry businesses to Stoke. Daniel Waterman and Richard Turner’s dream of revitalising the creative industry in Stoke is one we passionately believe in. But most excitingly, if we’re able to prove the success of this model in Stoke then we don’t see any reason why we couldn’t replicate it somewhere else, in fact anywhere where talent doesn’t get enough opportunity to work in our industry. We’d love to roll it out to other towns and cities, giving talented people greater choice about where they live and work.

“But VCCP Stoke Academy isn’t just about finding and nurturing talent, it’s also about retaining it. Entry level talent are not the only ones who find having any kind of life in London unsustainable, the same is true for employees with young families. If we can turn the VCCP Stoke Academy into VCCP Stoke, a successful VCCP agency hub, then we will have a way to both support our existing talent who may want to live and work elsewhere, as well as attract those who want to move out of London but continue to work in our great industry.”