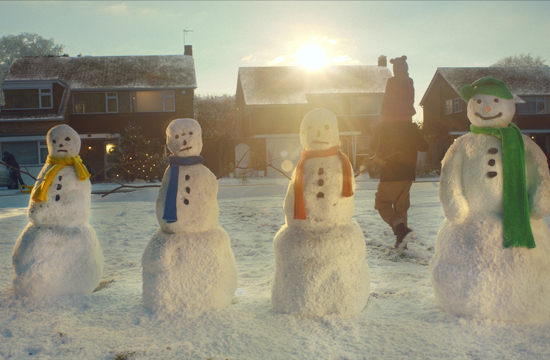 Asda launched their Christmas advertising campaign last weekend. During last Saturday night’s X Factor, two of the 20 television adverts that Asda has produced will be launched.

Featuring the strapline – You’re Better off at Asda – the campaign, developed with VCCP, depicts a number of quintessential seasonal scenarios – from making snowmen to hosting a drinks party – to showcase the award winning quality and unrivalled prices on offer at Asda this year.

The first 30 second TV spot, entitled ‘Snowmen’, sees a camera pan along a line of shabby snowmen standing in a garden - each one thin, frowning and missing proper arms and a carrot nose – decked in distinctive coloured scarves (yellow, blue and orange). Slowing to a standstill, the camera focuses on the last in the line - a beaming snowman, donning a green hat and scarf, bigger and better than his companions.

The narrator notes that we should think of supermarket savings as “these snowmen”. While other supermarkets promise to match each other on price, Asda is the only one that promises to beat them by a whopping 10 percent - one of many reasons why ‘you’re better off at Asda this year’.

The second spot, Wine Lovers – part of a series of six ‘Lovers’ adverts focusing on award winning products at unbeatable prices -  will also air. The ad tells the viewer that Asda has won over 200 awards for wine. We see a bottle of Asda wine as it leads us from one iconic Christmas scene to another.

Steve Smith, Chief Marketing Officer, Asda said: “ Our customers are the driving force behind this campaign and we know more than ever they need us to hold down the cost of Christmas and help make their lives easier.

“We’re different to the rest, we take our customers and our business seriously, but we’re keeping it simple, fun and lighthearted. We think it’s more important to invest money directly into lowering the prices of all our products instead of producing costly campaigns that just keep the ad guys happy.

“Our adverts won’t be celebrity filled features, they will shine a spotlight on the stories behind our great quality, award winning products and the unbelievable value for money of our whole range of gifts, food and drink – the real stars of our show.”

To support the launch, Asda has also booked a three-minute take-over of the X factor app within the same ITV ad break. The app, which has been used 6.9 million times already this series, will allow users to create and share their own Asda snowman for a chance to win an Asda shop worth £500.

Steve Smith continues: “.Although we have spent ten per cent less on our media plan this year, the reach and frequency of our campaign will be much higher. We’ve developed a campaign that means you won’t be able to pick up a newspaper, watch TV or go online without seeing one of our products or adverts.

“Again those savings are going directly into lowering the costs of products to help customers at a tough time.”

Mumdex research, conducted earlier in the year, found that one in five people were saving for Christmas as early as January. In addition to the added cost of Christmas, shoppers still worry about how they will manage their household budgets week in, week out in the lead up to the festive season and in response Asda’s campaign will focus on the festive essential people buy each week in the run up to and over Christmas.

The ad was shot by Alan Friel of the Park Village production company and is part of a wider integrated campaign that includes Radio, Print, Digital and Outdoor media.

Cliff Hall, managing director, VCCP Blue, says: “We are excited to showcase the brilliant Asda product to UK shoppers and tell genuinely amazing stories on both quality and value. We believe this campaign will communicate that shoppers are better off at Asda.”