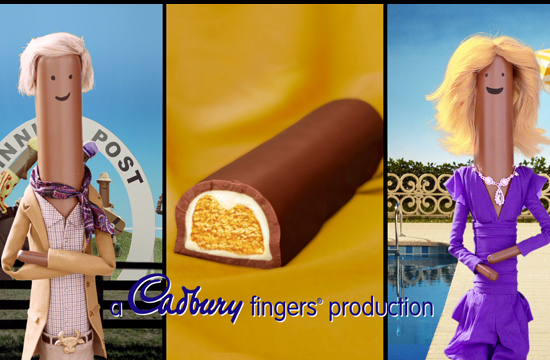 As part of Burton’s Biscuit Company’s ongoing investment in its market-leading power brands, £1.2m is being invested in a marketing drive to support sales of the two new Cadbury Fabulous Fingers flavours (honeycomb and praline).

Devised by VCCP, the two new 10-second TV commercials will air nationwide on Wednesday 1st May, appearing in programmes including ITV’s This Morning. The new ads will air alongside a comeback of the original 30-second TV commercial which features the Cadbury Fingers-style puppets – Caitlin and Madison Fabulous – in a 1980s American-style soap opera.

The flavours were introduced in March, and in addition to nationwide TV advertising, are being supported by sampling and extensive in-store support.

Media for the campaign was bought by UM London.

The Cadbury Sweet Biscuits brand, licensed by Burton’s Biscuit Company, is now worth an impressive £100m.  Cadbury Fabulous Fingers is the first sub-brand of the £43m Cadbury Fingers brand which is No. 3 in Total Chocolate Biscuits, and enjoyed by over one third of UK households.

The launch of the two new variants is accelerating growth of the highly successful Cadbury Fabulous Fingers, which since its launch in autumn 2011 has generated annual sales of almost £8 million, achieving household penetration of 8.5 per cent.