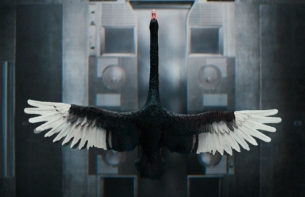 It opens in a wind tunnel. As we pan out, we see a black swan – the symbol of the improbable – flying against a fierce wind, as the voiceover describes the history of the bird.

Suddenly, the wind dissipates, and we cut to the car. The camera sweeps around it, capturing the lines and the beauty of the vehicle. The film aims to highlight the 570S as McLaren’s next "black swan moment.”