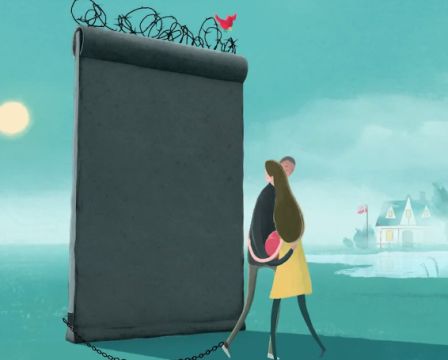 VCCP Berlin has created a content-led campaign for Airbnb, which launches on Friday 7 November. The brief was to celebrate an historic moment in Germany’s history - the 25th Anniversary of the fall of the Berlin Wall - and highlighting how Airbnb has the ability to help people feel like they belong anywhere.

The integrated campaign, “Wall and Chain”, depicts the true story of two former border guards from East and West Berlin, using animation from one of the world’s leading animation and illustration companies, Psyop in New York.

The emotional story tells of a West-German border guard in 1987, who leaves the city after completing his service. However, even after settling in Denmark, he is unable to get closure on his experience as a border guard. His daughter plans a trip to Berlin to overcome this experience, booking an apartment via Airbnb. On their arrival, the former guard suddenly realizes that the person, who welcomes them to the apartment, is in fact a guard from the east side of the wall. This reconnection of the past in a new era helped him to overcome the distress of the mental wall.

“We wanted to further reinforce Airbnb’s vision of creating a world where anyone can ‘Belong Anywhere’, by telling an authentic and emotive story, which highlights the power of human encounters and connections,” says Robin Karakash, Managing Director at VCCP Berlin.

The focus of this campaign is online via www.belonganywhere.com/berlin, where users can learn more about the poignant story through interviews with the former guards. Users are also free to share their personal Airbnb story via the campaign website. The activity will be promoted through various social media channels. In addition, the film can be found on YouTube and Vimeo.

The campaign launches today, Friday 7 November and will be rolled out in Europe and North America. The film will be film will be broadcast on US TV networks, including NBC and CNN, alongside relevant programming about the fall of the Berlin Wall.