VB Asks Aussies To Get Behind Our Cricketers

In its latest campaign via Clemenger BBDO, Melbourne 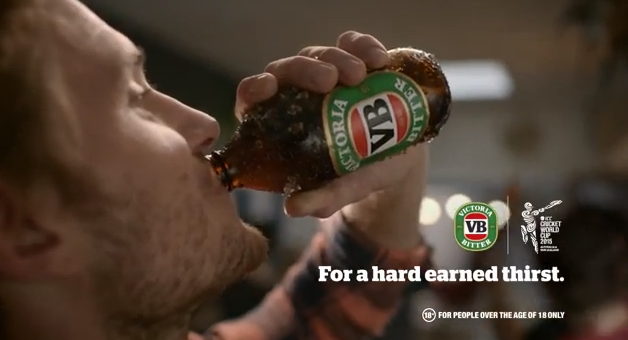 Victoria Bitter is urging all Australians to get behind our cricketers with the launch of its new campaign via Clemenger BBDO, Melbourne.

Victoria Bitter, Australia’s big cold beer is urging all Australians to get behind our cricketers as they launch their campaign to bring home World Cup glory tomorrow night.

To coincide with the World Cup, Victoria Bitter has launched a TV advertisement to ignite passion and rally support around the country for the Australia cricket team.

Victoria Bitter is proud to be the official beer partner of the 2015 ICC Cricket World Cup. Victoria Bitter will be leading the charge of passionate Aussie cricket fans across the country, featuring in pubs, clubs and other retailers.

As well as quenching hard earned thirsts of cricket lovers across the country, the famous Victoria Bitter logo will be emblazoned on the sleeves of the Australian team’s jerseys.

“Here at VB we love our cricket – whether it be on the hallowed turf of the MCG or on the beach - and we’re so excited to be rallying support for our boys when they take on the Poms tomorrow night and right through their campaign."

“It seems the fans are excited as well, more than 750,000 tickets have been sold to date and that’s predicted to exceed 1 million. It’s going to be a huge tournament,” Maclean said.

And even if you can’t make it to a match Victoria Bitter has you covered with the VB Live Cricket Watch which will keep track of every ball bowled during the World Cup. Haven’t got one yet? The good news is that there are 50 to be won every day of the World Cup, just by purchasing a specially marked pack of Victoria Bitter and entering to win.

“We’re hearing all sorts of stories about the lengths some VB fans are going to try and get their hands on a VB watch. Keep an ear out to the radio and you might just be able to pick one up for yourself,” he said.

The ICC Cricket World Cup 2015 returns to Australia and New Zealand for the first time in 23 years. With 14 nations hitting Australian shores, after 98 innings of cricket the world champion will be crowned again.

Join the conversation on Twitter @vic_bitter and using the hashtag #VBWATCH