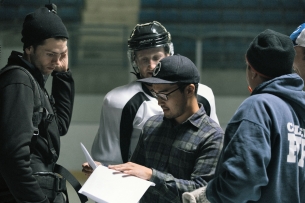 Choi’s work has earned some major awards as well as media attention, revealing his ability to connect with consumers, clients, social media junkies, festival juries, trade publications and savvy industry observers. His nine-minute lesbian love story for the UK ice cream brand Cornetto, “40 Love,” won a Silver Lion in Cannes in 2014 and was covered prominently by consumer and marketing trades. Narrated by the pop star Lily Allen, who also has a small role, it’s the engaging tale of a young line judge who gets knocked out by a female tennis star’s wicked serve. Already smitten, this kicks off a roundabout and slightly flirtatious involvement between the two that leads to a much-anticipated kiss.

“Lloyd is a great match for the vision we have here at Variable, which puts a high value on authenticity and visual language in the work we do, whether it’s our own personal projects or for the many brands and agencies we collaborate with,” says Ginter.

The recognition “40 Love” earned came on the heels of Choi’s much-loved spec spot for Chevrolet, “Maddie.” Told in a backwards timeline, it opens with a young woman and her dog at the vet, where viewers assume the dog is going to be put down, and then spools out in reverse as we see her and the pooch essentially growing up together.

Based on the strength of “Maddie” and “40-Love,” Canada’s Marketing magazine named Choi to its list of “30 Under 30” talents last year.

Lloyd first became aware of Variable’s work on Vimeo, where several of Variable’s short films have also been selected as Vimeo Staff Picks, the most recent being “Rocket Wars”, a five-minute exploration of a decades-old ritual that takes place every Easter on a remote Greek island. “I think we were drawn by a mutual love and respect for each others’ work,” Choi explains. “We started chatting and eventually connected in New York.”

Choi’s film career almost didn’t happen, despite his early attraction to cinema and his dabbling in DIY moviemaking before university. “I was about to go into aerospace engineering until a few weeks before school started,” he explains. “Feeling that path was so wrong, I moved across the country to go to school in Vancouver. I ended up living with the first-year film students, and started to learn and love the process of filmmaking with them.”

Like many of the Variable talents, and typical for filmmakers of his generation, Choi not only directs but often edits his own work. At Variable he’ll continue to approach projects as a director/editor, he notes, “but I also love collaborating with talented editors,” he adds. As for his goals in joining the company, they’re simple: “Holding onto that narrative soul in everything we create, doing so with deep and trusting collaborations – Variable being the perfect home for that – and staying true to what speaks to me.”