A cinematic storyteller with documentary roots, he adds depth to the New York-based company’s directorial and creative roster 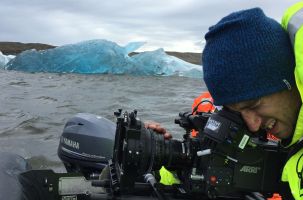 Director Greg Hackett has joined the production company/creative collective Variable for representation in the US. Based in London, Hackett is an accomplished young filmmaker whose work with his own UK company, Spindle, came to the attention of Variable’s partners, Director Jonathan Bregel and Executive Producer Tyler Ginter.

Hackett’s work has a stylistic approach very similar to the work that Variable specialises in, which is authentic-based documentary stories depicted in a lush cinematic visual style. His most recent film, produced for the New York Times, just broke online and is a perfect reflection of this sensibility: “Human Reflections”, a two-minute documentary about the Japanese artificial intelligence innovator Hiroshi Ishigura, captures his introspective, Zen-like quest to develop lifelike humanoid robots.

To view Greg Hackett’s show reel, go to: www.WeAreVariable.com/Greg. To view film grabs and behind the scenes photos, click here.

Films for clients such as Nike, Sony, Cartier, National Geographic, The New York Times, and the electronics giant Philips bear Hackett’s distinctive touch with lighting, composition and framing: all are contemplative, even-paced studies of people and their passions, told in a way that accentuates the drama without the need for heavy-handed voiceovers or titles.

One of his first films, a nine-minute piece titled “Experiments in Speed”, was produced for a UK maker of custom bicycle frames, Douhou Bikes. It tells the story of a group of enthusiasts who set out to discover just how fast their bikes could truly go. With over 2 million views and selected as a Vimeo Staff Pick, the film was covered by such outlets as Mashable, The Guardian and many others.

Another Hackett film, “The Longest Night”, produced for Philips, is a dark study of Icelandic fisherman, whose erratic schedules often result in agonising cases of sleep disturbance and sleep apnea. The company is funding studies into how to combat these ailments through innovative lighting.

“I like blurring the boundaries between what’s real and what’s ‘dramatic,’” Hackett says about his work. “In my films we capture atmosphere and texture that you’d expect to see in the cinema, but we apply them to journalistic stories.”

Hackett found his way into directing in a roundabout fashion. A history student while in college, he graduated with an interest in doing research for filmmakers, working with writers to make sure scripts were historically or factually accurate. He became friends with a photographer who was working on a documentary about refugees and got hooked on film. “I felt I had something to add as a storyteller, so I went out and bought a camera and started making films,” he explains.

“When we reached out to Greg we found our creative cultures and our approach matched up extremely well,” says Variable’s Jonathan Bregel. “We’d seen his work, and I related personally to how he started as a filmmaker, just grabbing a 5D and working his way up to this point where he makes such beautiful films. And they reveal that he not only connects easily with people, but that he’s got a strong connection with nature and intuitively understands the ebbs and flows of life. He’s a compassionate person whose empathy helps him tell authentic, human stories.”

Adds EP Tyler Ginter, “While Greg’s stories are beautiful and engaging, it’s also so important that we have these core values in common. He reflects all of the fundamentals that we look for in the people we partner with. He understands the values of building relationships while serving our clients and our crew with a humble and collaborative attitude.”

Both Bregel and Ginter note that, while Variable’s work is strongly rooted in the documentary genre, they frequently work in a narrative, dramatic style as well, with their upcoming promo campaign for National Geographic Channel’s “Before Mars” miniseries being a great example. Adding Hackett to their roster is an opportunity to continue to expand their work in the narrative vein.

“It’s an area Greg’s interested in, and we think his background telling real stories will help him attract not only narrative assignments, but larger and more complex projects as well,” says Ginter. “Documentary work teaches you how to work with small, nimble crews, and what we’ve found with directors who come up this way is that it’s easier for them to scale up for larger projects than it is for more traditionally-trained directors to scale down when required. It’s so important to remain adaptable and modular within the rapidly changing film industry.”

As for signing with Variable, Hackett sees it as a chance to broaden his horizons as a filmmaker. “I think we have a shared passion for the kinds of stories we like to tell, as well as for innovation in terms of how they’re made,” he says. “The idea of working with another company is very exciting to me, particularly one as inspiring as Variable. I feel there’s a lot we can learn from each other. They understand where I want to go as a filmmaker, and they provide truly holistic support to their directors. It felt like the perfect place for me to accomplish this.”

Hackett’s work has garnered significant industry awards and honours. His “The Longest Night” was named Brand Film of the Year and Best Foreign Language Film at the Campaign and PR Week film awards, while his Sony TKO film won Gold in the Best Editing categories for both the British Arrows Craft Awards and the Ciclope Craft Awards, and Bronze for Editing in the Creative Circle Awards. Four of his short films have been selected as Vimeo Staff Picks.