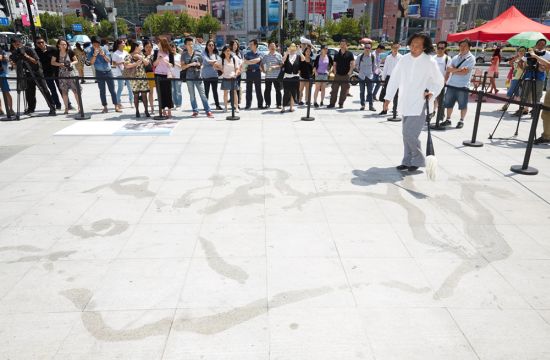 “In the time it takes you to read what I’m saying, one of our planet’s unique species will have become extinct. By this time tomorrow, a further 150 to 200 will have vanished,1” said Ms. XU Ling, Senior Program Officer at TRAFFIC. “There has never been a more urgent time to raise awareness about the dire state of endangered species, especially in China which has a seemingly insatiable appetite for threatened wildlife.”

O&M developed the idea to use water instead of real ink to paint life-size renditions of the most heavily consumed endangered species in China on the ground of the Grand Gateway Shanghai, one of the city’s most popular public spaces. Chinese artist Mr. WANG Xieda, who also joined the cause pro bono, painted four endangered animals on the ground, including the tiger, elephant, rhino and sea turtle, in the style of Chinese calligraphy. Within moments, the animal paintings had evaporated from the hot asphalt, illustrating that in the short time it took these paintings to disappear, one wildlife species would have vanished.

Held this month, the pop-up guerrilla art event had a QR code on-site that led passersby to the campaign mini-site where a call to action asked them to pledge to not consume endangered species and to spread the word on Chinese social media Sina Weibo.

"Art can be one of the most powerful media to send a message such as WWF and TRAFFIC’s mission to conserve wildlife and curb the most pressing threats to the diversity of animals on earth,” said O&M Chief Creative Officer Graham Fink. “We’re honored to use our craft to help non-profit organizations create something meaningful for an exceptional cause.”