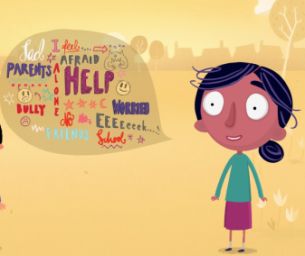 Creative agency Valenstein & Fatt (the creative agency formerly known as Grey London) has launched ‘Headbomz’ for the Vodafone Ireland Foundation, a schools programme aimed at children aged eight to ten years to remind them that ‘Talking Makes Us Stronger’. The campaign was created in partnership with ISPCC Childline and is designed to assist parents and teachers to show children how talking makes us stronger.
The colourful animation and song has a unique and fun twist on squashing problems as they arise, through talking about the problem rather than keeping it all bottled up. The Headbomz animation was created to deliver the important message of ‘Talking Makes Us Stronger’ to classrooms across Ireland. The catchy song is inspired by the squidgy, squelchy stuff that happens in children’s heads – those feelings that build up until their head feels like bursting! The film was created by Aardman studios, the creators of Shaun the Sheep and Wallace & Gromit, together with song writer Vikki Stone who currently presents BBC Proms Podcast.
Dan Cole and Andy Garnett, Creatives at Valenstain & Fatt, say: “Headbomz are exactly as they sound. If you don’t talk about the things on your mind, they fill your whole head up until it feels like its about to go BOOM! Which is a pretty cool side effect. All we did was take that slightly gory, squelchy idea of kids heads exploding and tell them how to avoid it… simply by talking. Because talking makes you stronger and keeps your head for longer.” 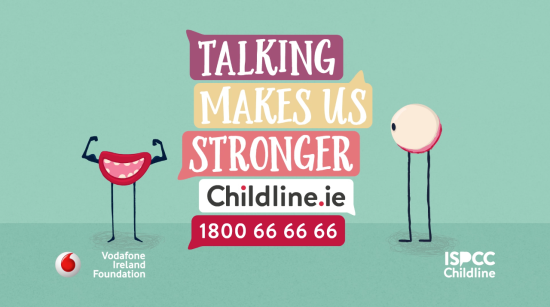 Åsa Lucander, Director at Aardman added: “It’s been great fun coming up with the visual style for ‘Headbomz’, it’s not often I get the opportunity to design gory, squelchy illustrations!  I think the fun creative will really resonate with kids in the target age group and help to spread the ‘Talking Makes Us Stronger’ message that can often by hard to broach with youngsters. It’s such an important topic and one I know both myself and Aardman are very proud to support.”
The entertaining, light hearted educational programme has been developed in response to new research conducted by ISPCC Childline and Vodafone among Irish children and a panel of Irish childcare experts, showing that children in this age bracket need more support to help them open up about their problems. 95% of children who participated in the research agreed it is essential to have someone to listen to them and help them solve problems, citing bullying, limits to freedom and parental problems as key areas for concern. 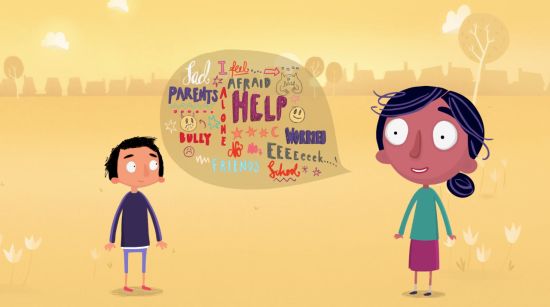 The aim for the song is to have it played in classes across the country, and be the conversation driver that helps get children talking! Schools’ packs will also be distributed to help teachers roll out the programme, including teachers’ letters introducing Headbomz, USB sticks with the karaoke version of the film, sticker sheets to help facilitate a fun discussion with pupils, interactive colouring sheets and posters for the classroom.
Anne O’Leary, CEO at Vodafone Ireland adds: “We are excited to bring Headbomz to life. We see it not just as a schools programme, but more as an important cultural movement among children and families in Ireland to start talking more openly together. By talking about the small stuff on a more regular basis, children will learn to become more comfortable to talk about the bigger problems they encounter. It’s only the beginning for Headbomz and we look forward to getting the nation’s children talking as they grow for years to come.”
The campaign encompasses TV, VOD, cinema and social which will be shown across Ireland from 19th May. The school packs will be delivered to schools up and down the country from 22nd May.
view more - Creative