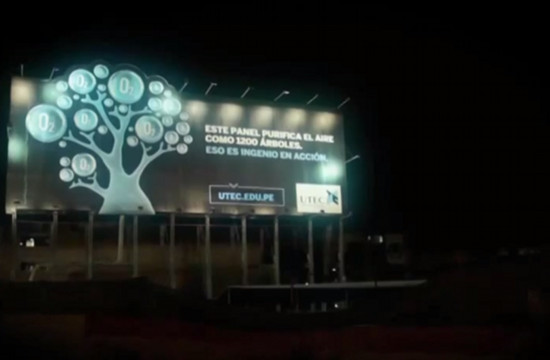 A billboard that brings together creativity, innovation and environmental protection is the new advertising approach with which Universidad de Ingeniería y Tecnología (UTEC) amazes the public, as the university announces it upcoming admission test on March 9. The air-purifying billboard is capable of purifying 100,000 m3 of urban air per day.

The billboard is located at the intersection of Bajada Armendáriz and Paseo de la República in Barranco. It has an air-purifying system developed with Peruvian technology that can clean large volumes of air, making it apt for human respiration, according to international and national air quality standards. The cleaner air reaches a radius of 5 blocks benefiting all residents of the construction area as well as the workers.

Jessica Rúas, director of promotion at UTEC, says, “This billboard seeks to spark young people’s interest in engineering. It is closely aligned with the university’s mission of educating creative engineers who are sensitive to social needs and have extensive scientific knowledge that enables them to become researchers and find solutions to society’s problems.”

“Furthermore, we want to demonstrate that engineering is behind everything, and what better way to do that than through advertising that changes the world, helps the community and protects the environment?” she added.

Once again, FCB Mayo was in charge of making the UTEC billboard come to life. With this new advertising, the agency sought to continue communicating the ingenuity in action message, as the  “water-producing billboard” has.

“Putting our own ingenuity into action gives us great satisfaction, because in addition to the creative challenge it presents, it enables us to raise awareness, inspire and innovate in our work as advertising professionals,” remarked Juan Donalisio, creative director at FCB Mayo.  “UTEC is a client that constantly challenges us, because its approach is not traditional. The university represents change. Therefore, its advertising does as well, and that makes us think about what is nearly impossible to do, in order to do it.”

The machine made operates by means of thermodynamic processes that occur in nature, such as pressure, vaccuum and decreasing temperature. Air and water come together in the machine and, at a given moment, balance their internal heat, causing the pollutants in one of the flows  (air), to remain in the other (water), in a highly efficient continuous process, with very low energy consumption.

The function of the machine is to take in air in urban areas and release it free of solid particle pollution such as dust, small particles of metal,  germs and  bacteria. Its energy consumption is only 2.5Kw per hour.

The water it uses is 100% recyclable. In addition, residue samples will be taken to analyse materials found in the air in Barranco.