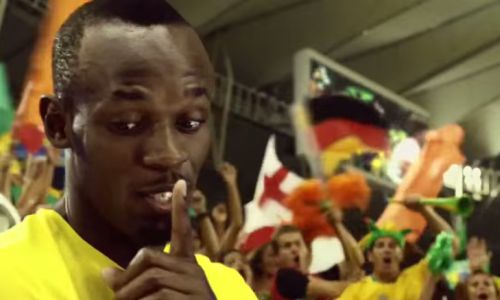 The campaign features two phases, the first giving consumers the chance to win trips to go to Brazil and experience the FIFA World Cup, and the second showcasing Visa’s payment technologies and how they empower consumers – helping their lives “Flow Faster”.

The campaign is built around the idea of “Following Bolt to Brazil” with Usain Bolt being football’s fastest fan. The campaign, developed by Saatchi & Saatchi London, will run across 22 markets running through until the end of the tournament.

The TV commercial, which will break on May 30th, shows Usain Bolt on a journey from a Jamaican athletic track to the world famous Maracana stadium. On his journey Usain becomes immersed in Brazilian football, transforming from an athlete to a footballer with every online, contactless, and mobile purchase.

The campaign will run across a whole range of channels, aiming to reach over 300 million European consumers. Its extensive use of digital media will become part of what promises to be a ‘social’ FIFA World Cup.

Visa has a rich heritage of sponsorships, including partnerships with the top two global sports events. This is its second FIFA World Cup sponsorship. These globally iconic events provide a unique backdrop for consumers to engage with the brand.

Colin Clarke, Executive Director at Visa Europe, said: "We wanted to develop a new way to communicate our innovative products whilst using our FIFA World Cup sponsorship. Usain had already worked with Visa Europe and with his love of football it seemed a natural fit for him to lead our campaign: a FIFA World Cup promotion that will capture the spirit of football, the world’s fastest athlete and our products helping people’s lives flow faster.”

Usain Bolt, Visa Europe Innovation Ambassador, commented: "Its great to be working with Visa Europe again and I am thrilled to be part of their FIFA World Cup campaign. Everyone knows I love football and it’s a great chance to be part of what’s going to be a fantastic tournament.  I know Visa is making payments faster and with my speed it feels really right to work with them.”