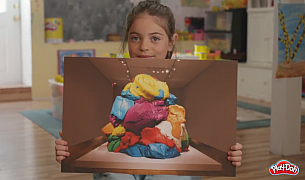 It's Christie's vs. Kristie's.

Having seen the awe-inspiring sculpture on the news and in person, Kristie decided she could make one “just as amazing” and is auctioning it off on eBay to help raise money for children in need.

Christie’s Auction House recently sold the famous “Play-Doh” sculpture for $22,812,500. Kristie would like hers to go for a "bajillion dollars" and the current bid for her Play-Doh sculpture is $1,040!

Profits from Kristie’s sculpture will go towards the non-profit organisation Give Kids the World.

Hasbro, the company behind the famous Play-Doh product, supported Kristie’s endeavour by donating the Play-Doh she used for her creation. Additionally, the company is promoting Kristie’s auction on Play-Doh’s Facebook and Instagram.

Uproar! was the agency that created the videos and all the digital and social content for Kristie’s Super Awesome Auction, and DDB New York served as a creative consultant.

The conversation around Kristie’s sculpture and initiative will fuel the long-held debate around modern art, which questions whether children could have “produced something just like it.” It’s also sure to spark interest in childhood creativity and show how far a child’s imagination can take them.

To learn more about Kristie and her Super Awesome Auction, watch this fun video.

Also, get a closer look at Kristie’s Play-Doh sculpture in this auction preview video.