'Unleash the Real You' in Spot for Ruffles Mexico 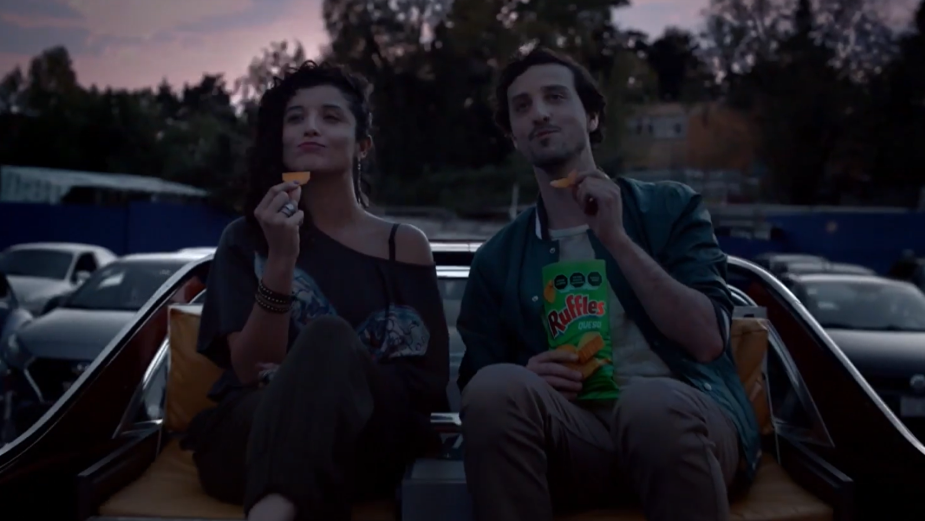 Ruffles’ new campaign, created by New Macho, the male marketing specialist division of BBD Perfect Storm, delivers on the brief to show men at their most attractive when they are confident enough to be themselves. Grounded in a host of insightful research, this refreshing new campaign aims to redefine how the brand portrays modern attraction, and brings an up-to-date view on relationships. As Mexico is one of the largest markets for PepsiCo globally, this is a significant new strategic purpose for the brand.

The film opens with an everyday, young man driving an unusual vintage 'El Camino' through city streets. This oddly-shaped and brightly-coloured car elicits varying responses – from ridicule to disbelief, but the protagonist has the confidence to shrug it off. Upon arrival at a drive-in cinema, he parks next to a group of young women, however much to their confusion, he parks in the opposite direction to the screen. But as he exits the car, it’s obvious that he has a plan. He climbs into the trunk of his vehicle and flips down two custom seats, then sits down to enjoy his Ruffles. Glancing over to one of the women next door, he offers her the spare seat and of course, his Ruffles. The 30-second advert ends with the couple watching the movie together along with the new Ruffles tagline, “Libera Tu Sabor" (“Unleash Your Flavor”). The larger integrated campaign also includes 20 and 10-second versions of the film, as well as a host of social and digital content.

PepsiCo recently undertook research to understand how Mexican men are coping with societal expectations and their happiness levels. They found that a large percentage of men surveyed struggle with the demands put on them to perform to a persona which isn’t true to their values. It also revealed the insight that both men and women need to build their confidence in the dynamics of a balanced relationship. Rather than mastering women, ‘Unleash Your Flavor’ aims to demonstrate that men can successfully engage with potential partners by being authentic, and that attraction is about connecting, not conquering.

Hernan Tantardini, SVP and general manager savory at Pepsico Mexico remarked: “‘Thanks to New Macho’s insight and creativity, Ruffles is able to lead the conversation surrounding new masculinity and positive, modern relationships in Mexico. We believe we should represent equality within all parts of society, and advertising has a purpose and role in portraying these values.”

Fernando Desouches, BBD Perfect Storm’s managing director of New Macho commented: “It has been a privilege to work on this profound brief. Ruffles is one of the biggest brands in Mexico and has a significant role in demonstrating positive and balanced relationships. The cornerstone of our campaign, ‘Unleash Your Flavour’/ ‘Libera tu Sabor’ is ensuring men understand they are their most attractive and “irresistible” when they are being themselves.”

Cory Eisentraut​, creative partner at BBD Perfect Storm stated: “It is always rewarding when we have an opportunity to work with brave clients like Ruffles, which are willing to fly in the face of toxic stereotypes and change the cultural conversation. We’re incredibly proud to help be a part of that change.”

New Macho, the specialist strategy unit in BBD Perfect Storm, were appointed as they are global leaders in redefining how brands reflect a balanced role in society for men. They have been championing the issue across political and media platforms for over three years, gaining recognition with a place on several UNWomen projects, including Unstereotype Alliance as the first independent agency to join the UK Chapter. Clients include Unilever, Kraft Heinz, Charles Tyrwhitt and Vitality.