Unite This Christmas with KFC 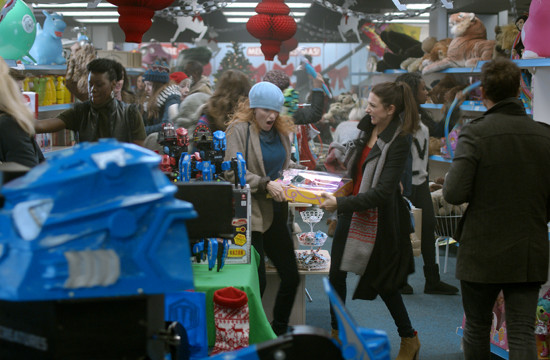 Just when you thought you’d seen all of the blockbuster Christmas ads, KFC today launches its first ever Christmas campaign with a musical extravaganza which sends up the schmaltz of Christmas – asking people to put aside their differences during the most stressful time of the year and unite over a bucket of KFC.  The ad will take over almost an entire ad break during the X-Factor this Saturday.

The campaign highlights the brutal truth, that Christmas can often be a time of lack of good will to all men. ‘KFC Xmas – Come Together’ is all about making yuletide peace, and will give one viewer the chance to build bridges with a loved one on national TV by starring in a special new KFC advert which will air during the X Factor final on December 14.

The 2.5 minute advert is filmed in the style of a musical epic with a corresponding “Christmas Number 1” style song performed by a range of humorous characters and the newly formed KFC choir. Lyrics such as “typically I hate your guts, and I’d try to kill you but, one of everybody’s vices, is 11 herbs and spices” highlight the full-on cheese of the ad and the idea that no matter what differences we may face this Christmas, it’s nothing that a bucket of KFC can’t fix.

Saturday’s launch will kick start a week-long campaign on social media allowing people to tweet about someone they would like to make peace with this Christmas alongside the hashtag #UniteThisXmas. The winning tweeter will have their conflict resolved by starring in a brand new advert with a specially written song performed by the KFC Choir. The advert will be watched by millions of people during the X Factor final on 14th December – one of the TV events of the year.

Meg Farren, Marketing Director, KFC, comments: “This Christmas, we not only wanted to do something different but also wanted to stay true to what KFC is about -bringing people together over a shared great taste - whilst having fun and encouraging people to join in.  We’re also really excited about using social media in this way and engaging consumers using Twitter. ”

David Kolbusz, Deputy Executive Creative Director, BBH added: “We wanted to make something that stood out from a lot of ads you come to expect this time of year.  The trick was to address the reality of unavoidable yuletide stress and conflict without depressing people.  We decided the best way to do this was through the medium of song.   A schmaltzy, sugar-coated song.”

The campaign, which was created by BBH, with media buy handled by Walker Media and the social campaign handled by Fabric Worldwide, marks the launch of a step change in KFC’s approach to advertising and integration of social media.

The song will be available for the public to download on iTunes once the advert has aired, and fans can follow the KFC Choir on Twitter, @KFC_Choir.

Exposure (where is this work running, country and media type):