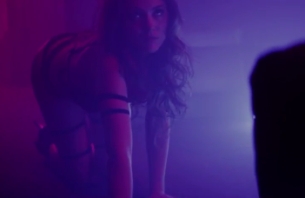 Director duo Greg&Jacob wanted to explore the idea of someone reaching for sense of identity in a world they can’t quite relate to. The lyrics “Are you cut in two, cut all the way through” gave birth to the concept of Joe as a character, and his unconventional relationship with both Jenna and himself.

The actors really were vital in making the concept come to life. With eye contact and subtle body language, Harry and Natalie needed to silently imply an existing relationship. “They both did an amazing job. Harry’s got this intensity in his face that just draws you in; and Natalie has these big beautiful eyes that are sultry, but at the same time soft and vulnerable,” say Greg&Jacob.

“The transition was the most fun to shoot. The effect was done in camera and was simply a case of us shouting “drop!” when the camera moves behind the head of Harry’s body double. Natalie would quickly drop to the floor and crawl away, as Harry shot up into the same position, just in time for the reveal. It took a few takes but it was pretty satisfying when we nailed it! It was so refreshing to have the creative freedom to make this film exactly how we wanted to make it. This took a lot of trust from the band which is something we were immensely grateful for.”
video
New music video from Greg&Jacob for Pure Bathing Culture - "Pray for Rain"