Awards and Events 465 Add to collection 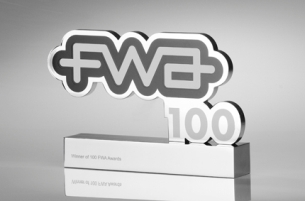 Production studio UNIT9 is proud to announce that it is the winner of the rarest digital award in the world – the FWA 100, making them one of only two companies in the history of digital media to do so. They received their 100th FWA award for an interactive experience created for Twitter at the annual CES show in Las Vegas, with director collective and studio Hellohikimori.

FWA (Favourite Website Awards) is an industry-recognised awards program for cutting edge digital work. Established in 2000, FWA specialises in identifying emerging trends whilst showcasing the latest progressions in digital creativity. FWA showcases one site every day, a Site Of The Day (SOTD), with a Site Of The Month (SOTM) being selected at the end of each month from that month’s SOTDs. At the end of each year the twelve SOTM winners are entered into the People’s Choice Award (PCA), and the overall Site Of The Year (SOTY).

Some of the most awarded UNIT9 projects include the interactive music video for Arcade Fire - ‘Just a Reflektor’, the Disney ‘Find your way to Oz’ and Adobe Creative Mind websites, the Lifesaver app, and the zombie live action game Five Minutes, which won the 2014 FWA People’s Choice Award.

“We are immensely proud of receiving the FWA 100 award. It’s a huge milestone. As big as the first FWA we ever won. I remember that day vividly - I knew that the spirit that drove us to win one FWA would enable us to win more. But we still take it one project at a time. Always as if we were aiming for the first one,” said Piero Frescobaldi, Creative Partner and Co-founder of UNIT9.   “Today it’s 100. It is a good moment to rest, look back and thank the hundreds of talented young people over the years that put their passion into the work, as well as the great clients that made it all possible. But tomorrow we are back at zero and we aim for that elusive first one.”

Rob Ford, FWA Founder said, “For us at FWA, winning 100 FWAs is something we never dreamed any agency would do. Even though this achievement is all about the number 100, for us, it is more about the journey, which signals over a decade of dedication, determination, consistency, adaptability and passion. UNIT9 have made a rare achievement here and one that sees them at the very pinnacle of digital and the history of the internet.”