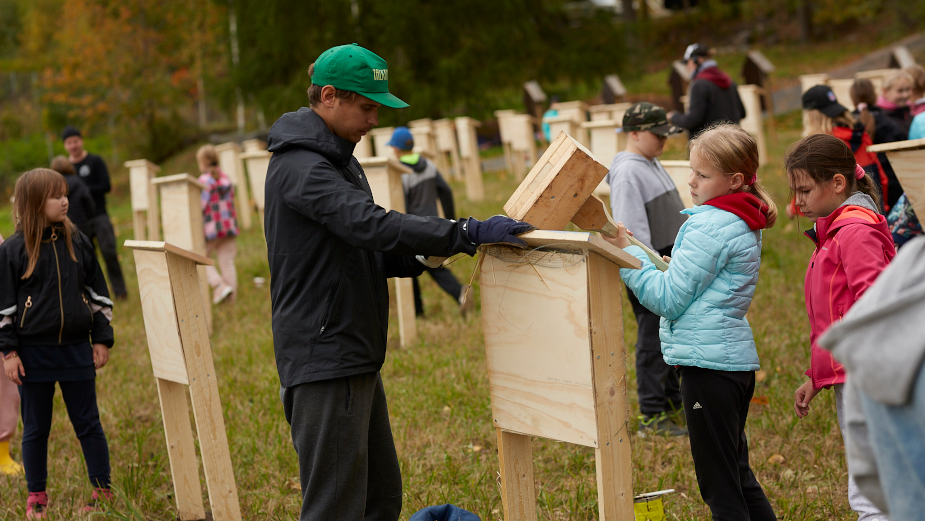 Pollinating insects are in decline, and some insect species are facing the threat of extinction. A world without bees would be a world without coffee, apples, potatoes, strawberries, carrots – and much more. That’s because up to 75% of all of our food crops depend on pollination one way or another.

And it’s not just the bees that are in decline. Living habitats that the pollinators prefer are also in decline as meadows and flower fields have been turned into building lots for city-planning.

That’s why a Finnish electricity distribution company saw untapped potential in their land use. In Finland the land is released for better use when the air cable lines are moved underground because of the cold and snowy weather conditions.And so, the idea of an insect hotel village came to be.

“We wanted to do something for nature and bring joy to local school children. First, we planted flower seeds on one of our worksites. Then we provided building materials for the local schools, so the kids could learn about the importance of pollinating insects and plan their own village for the bees”, says the Head of Customer Relations of the electricity distribution company Caruna, Katriina Kalavainen.

One hundred hotels for pollinators

The insect hotel village provides shelter as days get colder and the bees look for a perfect spot for winter hibernation. Next spring the bees will wake up from their Air Bee n’ Bees ready for a new season.The kids built over 100 insect hotels and styled the hotels according to their own artistic vision.

“It’s a light-hearted approach for a serious issue – and it provides serious benefits. The children were enthusiastic about the project and many schools wanted to take part as soon as they heard of it. All in all over 100 insect hotels were built and set up in the town of Lohja”, says Tuomas Karvonen from TBWA Helsinki.