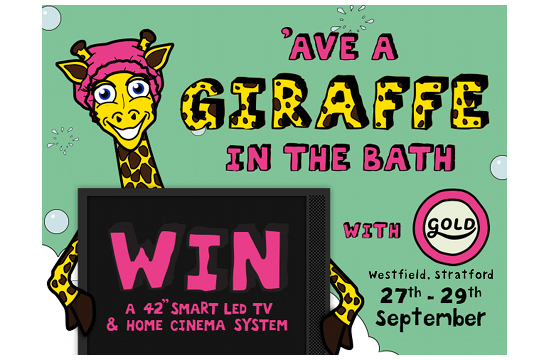 Gold, part of UKTV’s network of award-winning channels, is launching its biggest integrated campaign for 2013 with a three-day activation at Westfield Stratford, created by Initials Marketing with interactive production by Grand Visual.

The ‘Ave A Giraffe’ push, based on cockney rhyming slang ‘have a laugh’, targets 35-54 BC1C2 viewers in the UK with the aim of increasing engagement with the channel, making it a destination channel to watch with the whole family.

The activity, which kicks off this Friday (27th), includes a fixture in the form of a bathroom complete with sink and toilet pods as well as a large 103” plasma screen featuring an animated giraffe sat in a bath full of bubbles. Brand ambassadors, dressed in Gold branded giraffe onesies, will encourage shoppers to take part in a competitive game of ‘Ave A Giraffe in the Bath’ for the chance to win a 42” smart LED TV and home cinema system.

To take part, consumers must submit their name and email address via a Nexus 7 tablet positioned at the sink pod. To play, they must sit on toilet pods using a tablet embedded in a newspaper. Players, who can compete as individuals or in pairs, must select their tool of choice from a toothbrush, loofah or soap bar, and use it to burst as many bubbles as they can in 60 seconds. As the bubbles are popped, the giraffe reacts in a humourous way. Games can be watched on the big screen, controlled from the tablet.

On completing the game, consumers receive an email encouraging them to share their experience and score via their Facebook page or on Twitter. Every consumer that plays the game will receive a Gold branded rubber giraffe duck to serve as a continued reminder of the brand when the consumer returns home. The player with the highest score from each day will win the top prize.

Leaflets will also be distributed promoting Gold’s on air ‘Watch & Win’ promotion. From 8-10pm every day in October, viewers of Gold will be encouraged to look out for a weekly code word revealed on air via ‘Ave A Giraffe’ themed promotional slides. From here, consumers are directed to Gold’s Facebook page, facebook.com/GoldTVChannel, where they must open a campaign themed app by entering the relevant code.  In doing so, consumers are automatically entered into a weekly prize draw to win a TV and home cinema system. Viewers will also have the chance to play an online version of the ‘Giraffe in the Bath’ game.

Initials Marketing worked with Grand Visual, which is responsible for building the digital component of the activity via its Grand Visual Agent system, a platform developed to allow interaction between a tablet (and mobile) device and digital out of home screens.

Sarah Yeoman, senior brand manager at Gold, said: “Sometimes it’s the most random of things that make people smile or laugh. The unexpected or unusual turns heads, and provides a source of entertainment and amusement due to its surprising nature. ‘Ave A Giraffe’ strikes a chord by turning the bathroom into a play room. Initials has delivered campaign creative and an experience which will appeal to the whole family.”

Richard Barrett, managing director at Initials Marketing, added: “The target audience is infrequent viewers who generally only watch shows on Gold during special occasions with the whole family. So we needed to create a campaign which would both drive frequency to the channel, and appeal to shoppers of all ages.

“Cockney rhyming slang is quintessentially British and epitomises both the nation’s sense of humour and Gold’s brand personality – a channel which guarantees to make viewers laugh. So we came up with the idea of inviting them to ‘Have a Giraffe’ with Gold instead. Brand ambassadors dressed in giraffe onesies add an additional element of humour, while giveaways like the rubber ducks serve as a continued reminder of the brand when the consumer is at home or on the move.”

Tim Last, senior digital producer at Grand Visual, said: "Smart device driven interaction is driving greater engagement in experiential activations. This is a hugely fun game with the tablets giving players complete control of the big screen and the bubble bursting action. The Agent platform allows them to get involved and to submit personal data to enable score sharing and interaction tracking."