Agency Network of the Year prize was picked up by OMD 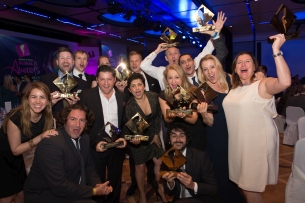 Today sees the announcement of the winners of the Festival of Media Global Awards 2015 - the most influential media industry event in the world, which takes place in Rome this week. Click here to view the winning entries.

Australian campaign ‘Penny the Pirate’ from optical brand Luxottica (OMD / M2M) has been named the clear winner in the awards, picking up four golds and the ‘Campaign of the Year’ trophy.

In terms of the ‘Agency of the Year’, Starcom MediaVest Group (US office) has triumphed, garnering an impressive eight trophies (four gold, two silver and two bronze), including three golds for the Always #likeagirl campaign (P&G).

In the headline award of the evening, the ‘Agency Network of the Year’ prize was picked up by OMD, who won by a clear margin, across multiple campaigns, brands and offices, including a strong performance from their UK agency.

The highly anticipated announcement comes on the back of a 20 per cent uplift in entries, making it the most competitive year yet.

Over 50 of the world’s leading brands were rewarded for their work, with gold trophies being picked up by eight countries around the globe.  Having not won any gold awards at all in the 2014 Festival of Media Global Awards, USA tops the country winners’ list in 2015, with a grand total of 15 trophies. In second place is Australia with 12 awards, and in third place is the UK with 10.

The final jury which deliberated each of the 24 categories during the Festival was made up of leading industry minds from around the world, including Lori Ogrinz, Head of International Advertising, RedBull; Daina Middleton, Global Head of Business Marketing, Twitter; Sarah Mansfield, VP Global Media, Europe and Americas, Unilever; Amrita Randhawa, President, Mindshare China and Anne-Cecile Michaud, Global Head of Strategy, Havas Media Group.

In order to champion diversity – a hot topic among this year’s festival speakers - the juries featured the highest ever ratio of female to male participants, with a 40:60 split.

Highly contested were five new categories in this year’s awards, each of which reflects an increasing shift towards technology in the media landscape. These are Best Use of Programmatic Technology, Best Use of Native Technology, Best Use of Video, Best Community Development and Best E-Commerce Campaign. Each category is open to agencies, brands, ad technology companies and any operating within these areas of the media industry.

Alongside the awards, this year’s Festival has focused on how media is driving, colliding and influencing other business sectors, while providing insight into the industry’s most pertinent topics.

The event attracts the biggest gathering of brands and forward-thinking media leaders from over 41 different countries, making the event a truly global meeting of media talent and inspiring leaders.

Charlie Crowe, Chairman and Editor-in-Chief, C Squared, comments: “We are really trying to develop our awards categories to not only reflect the changes taking place in media but also to challenge the industry to push new boundaries. And guess what? The industry has responded!

“In nine years and across 19 Festival of Media shows since we launched, we have never seen more award entries of such high quality, as well as a 20 per cent increase in entries overall.  We have a duty to ensure this work is shared globally, to inspire even greater heights for next year.”

“There were at least five occasions in the jury rooms where the arguments were over whether multiple gold awards should be given. We have a duty to ensure this work is shared globally, to inspire even greater heights for next year.”

Chris Carmichael, Global Head of Media, HSBC, adds: “I was incredibly impressed by the high quality of entries.  In some cases, there were five or six entries in each category which had the potential to win gold, leading to some heated discussions and tough decisions during the voting in order to decide the final winner.

Jon Suarez-Davis, VP, Global Media & Digital Strategy at Kellogg Company, adds: “The mix of media agencies, advertisers, plus, for the first time, the addition of media owners and ad tech companies in the jury made for a dynamic debate and how seeing such great work will go on to inspire our own media decisions.”