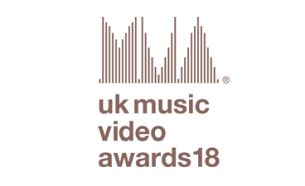 The UK Music Video Awards 2018 opens for entries today (June 14th). The leading awards event for music video creativity in the world, the UKMVAs will be celebrating its 10th anniversary when it returns to London’s iconic Roundhouse on Thursday 25th October in front of an 800-strong audience of international music video-makers.

The UKMVAs has been bestowing honours on the best work and greatest achievements in music videos since 2008. In that time, it has grown into the most important annual event in the calendar for the world of music video production. The global reach of the competition last year saw entries from over 30 territories, with filmmaking talent from around the world nominated alongside both new and established British talent.

From awards for music videos in different music genres, to honours for technical and craft achievement, live performance films and interactive videos, as well as categories celebrating an individual’s body of work, the UKMVAs is now accepting submissions via the dedicated website at www.ukmva.com until the entry deadline at midnight, August 1st 2018 (BST).

Longtime supporters of the UKMVAs are also back on board as partners: leading camera and lighting company Panalux will sponsor the highly prized Best Cinematography award, while post production studio Time Based Arts returns to sponsor the Best New Director award. Worldwide Production Agency, international representatives of film production professionals, are once again sponsoring the UKMVAs’ prestigious Best Producer award.

This year’s visual campaign, inspired by the MVA’s distinctive sound wave logo, sees art direction team StudioThomson collaborating with content creation studio Mill+ to create a series of idents and moving images. With sound design by Jungle Studios and Native Music, the visuals will be unveiled across the Awards website and social media during the life of the campaign. Post production house, Locomotion, another long-term partner, will be interpreting the visuals for the big screens on the night.

Aside from the ceremony in October, the UKMVAs are also planning a series of events where new directors, producers and other new talent will have opportunities to meet with and learn from industry experts, continuing from a series of events around the Awards show held for the first time last year.

The UKMVAs will also be continuing their partnership with diversity champion MAMA Youth Project this year. MAMA Youth will be back at the Roundhouse with a new group of trainees to film and produce content again for this year’s Awards.

The UK Music Video Awards editorial director, David Knight, says: “It’s hard to believe the UK Music Video Awards has reached is 10th anniversary year – but we’ve made it. A great deal has changed since 2008, of course, and how the UKMVAs has grown in the past decade has a lot to do with how the role of music videos has changed. It’s become a crucial element in the life of most music artists and their work, and a significant part of the culture once more. The way music videos are consumed keeps evolving. All the time music video makers are there to find creative solutions to the demands set by music artists, we will celebrate the best of them.”

The UK Music Video Awards 2018 is now open and accepting entries in over 30 separate categories, including genre-led awards, as well as specific technical and craft awards, and awards for individual producers, directors and commissioners, and for overall production companies. Entries can be made via the MVA website www.ukmva.com and the deadline is August 1.

The award categories are:

Best Styling in a Video sponsored by i-D

Best Cinematography in a Video sponsored by Panalux

Best Colour Grading in a Video

Best Editing in a Video