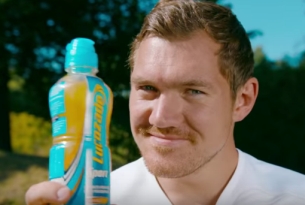 With rugby set to be a massive cultural event across the UK & Ireland this autumn, Lucozade Sport is letting its playful side out with its new marketing campaign, ‘Strictly for the Home Nations Only’. Positioning the drink as the secret weapon of the home nations’ rugby teams and banning the drink from all visiting nations outside of the UK and Ireland.

As part of a £9m spend for the brand this year, the fully-integrated activity will include a 30/60 second TV advert, a host of digital content, national sampling, in-store activation and an on-pack promotion, to ensure engagement and awareness levels remain high throughout the period.

Vicky Morgan, Marketing Manager for Lucozade Sport, comments: “The campaign idea is centred around a bit of a heist; the overseas players are trying to get their hands on Lucozade Sport. It’s the type of campaign that will leave a lasting impression with people far and wide, as it’s a different tone for the brand as it champions the banter and sportsmanship that rugby is renowned for”.

The TV ad shows international rugby stars from across the world pretending to be players from the home nations in order to fool shopkeepers around the UK into selling them Lucozade Sport. This includes putting on accents and dressing in disguise – from Drew Mitchell, Australian Rugby star, having English elocution lessons, to Bryan Habana, the South African winger, dressed in a kilt learning a Scottish accent. But there is no need to worry as our home nations’ heroes are on hand to foil their attempts to get their hands on Lucozade Sport with Chris Robshaw, Leigh Halfpenny, Conor Murray and Stuart Hogg coming to the rescue.

Commenting on the experience, Leigh Halfpenny said: “Alun-Wyn Jones and I were asked to give Jacques Burger a crash course in the Welsh accent, and he coped extremely well. It was a great day where we could all have a bit of fun and not take ourselves too seriously!”

Darren Wright, Creative Director, Grey London, says:“Sports advertising can often take itself a bit too seriously. With this campaign, we wanted to bring a bit of levity to the tournament. And when we found out the French Rugby Federation had asked to be supplied by Lucozade Sport for the duration of the tournament, it gave us our opportunity. So with our tongues firmly in our cheeks we banned Lucozade Sport from any visiting teams: giving the home nations the advantage they're probably gonna need to beat them.”

Let’s hope the ban gives the home nations teams a fighting chance to make the finals.