The UK’s authoritative advertising statistics, released today by the Advertising Association/Warc, show that UK advertising expenditure posted 5.2% growth in H1 2016 despite economic uncertainty before the EU referendum.The growth rate was 0.4 percentage points ahead of forecast, with adspend reaching a record £9,999m in total for the first six months of the year.

Growth in internet adspend was particularly strong, increasing 16.9% to reach £4,777m in H1. Within this category, mobile spend grew 52.6% to £1,723m – and for the first time mobile now accounts for over half of all online display adspend in the UK.

In light of the data, full year growth forecasts for 2016 have been revised up 1.0pp to 5.2%. However the forecast for 2017 has been downgraded by half a point to 3.3%, as the impacts of the EU referendum result begin to unfold.

“Investment in UK advertising remains strong this year, and the trend towards digital and mobile continues – but the medium term is more complex. The Government should avoid any regulatory uncertainty that might affect advertising's stimulus to the economy.”

The Advertising Association/Warc Expenditure Report is the definitive measure of advertising activity in the UK. It is the only source that uses advertising expenditure gathered from across the entire media landscape, rather than relying solely on estimated or modelled data. With total market and individual media data available quarterly from 1982, it is the most reliable picture of the industry and is widely used by advertisers, agencies, media owners and analysts. 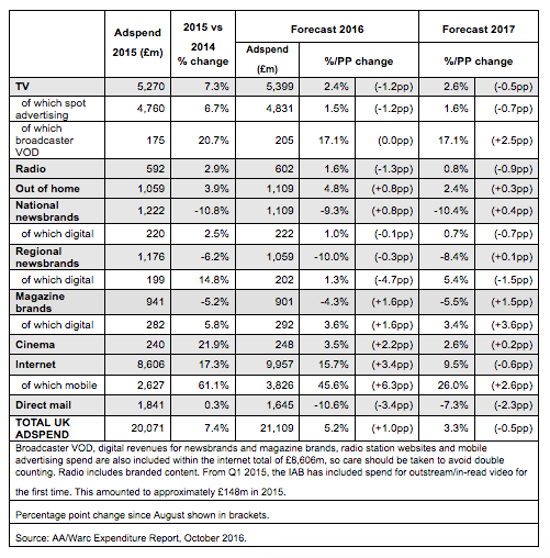 · TV spot expenditure grew 0.8% year-on-year in Q2, and 2.1% in H1 to a total of £2,387m. As a consequence of weaker than anticipated Q2 performance, full year expectations for TV spot have been downgraded to 1.5% growth. However, video on demand (VOD) adspend is expected to grow by 17.1%.

· Direct mail Direct mail adspend fell 13.3% in Q2. The vast majority of this decline was recorded among SMEs – i.e. non