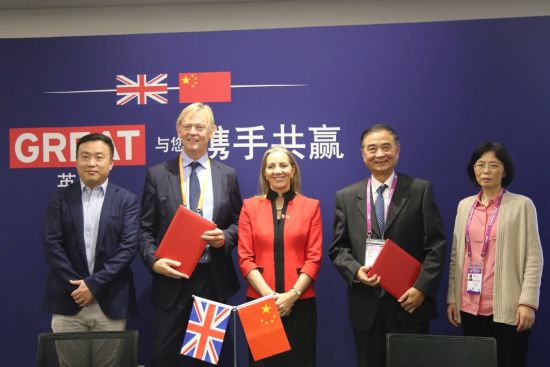 The Advertising Association (AA) and the Institute of Practitioners (IPA) have signed a Memorandum of Understanding on cooperation with the Shanghai International Advertising Festival (SHIAF) organising committee to enhance UK advertising’s presence at next year’s festival. The development marks the next step in the AA’s Promote UK industry group, in partnership with the Department for International Trade (DIT), to support the UK as the global hub for advertising.

Stephen Woodford, Chief Executive, AA, signed the MoU at a ceremony at the National Exhibition and Convention Center in Shanghai. The event took place as part of the China’s first international import exhibition, China International Import Expo, running from November 5th to 10th. The expo marks the steps that China is taking to open up its market to the world and increase overseas imports into the country.

The event was also attended by Baroness Fairhead (Minister of State for Trade and Export Promotion, DIT) and included several other agreements on cultural and business collaborations by other organisations from across the UK media and creative sectors such as BAFTA and the BBC.

Central to the agreement is a UK forum at SHIAF 2019 and the AA and IPA will partner with SHIAF to bring more UK’s advertising expertise to China in the future, including British judges, entries and speakers at the festival. The agreement will also see more agencies and production companies cooperating with a growing number of their Chinese agency peers and brands.

Stephen Woodford commented: “It is hugely exciting to have signed this agreement on cooperation on behalf of the UK advertising industry with SHIAF. The Chinese economy has grown impressively over recent decades and business links between China and the UK have strengthened enormously, with partnerships developing across all areas of the economy.

“China has a growing middle class and will soon become the world’s biggest consumer market, while the UK is the world’s leading hub for advertising services, helping international businesses build successful brands. Agreements such as that signed today enable cross-border collaboration, as well as assisting both Chinese firms to grow their operations overseas and for UK firms to tap into the enormous business opportunities that China represents.”

The UK is an advertising exporting powerhouse, with British advertising services worth £5.8 billion according to the latest available figures. The figures showed an increase of 35% and the UK’s balance of payments surplus for advertising was the biggest in Europe - £2.9 billion.

The UK also wins more Cannes Lions advertising awards per capita than any other country, with over 1,500 won since 2005 and leads the way for the best creative and most effective advertising campaigns.