Navarro will work on the Chubb, Facebook and Reuters accounts, while Boonin will handle Chubb, Google, Uninterrupted and Uber 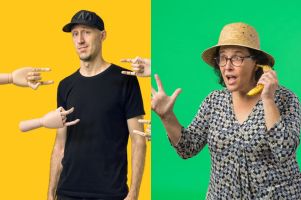 Full-service digital agency Ueno has made two key appointments, CEO Halli Thorleifsson announced today. David Navarro was named executive creative director for its NYC office and Elisabeth Boonin was hired as US executive technology director; she will work out of the agency’s San Francisco office.

Navarro comes to Ueno from Stink Studios, NY, where he was creative director for the last year in charge of creative, art and design direction on selected projects and pitches. Clients included Alphabet, Samsung, Spotify, Calvin Klein, Pitchfork, Audible, Starbucks and Wired. As digital creative director/head of design for J. Walter Thompson (JWT) in Amsterdam from 2013 to 2016, he built and managed the digital team and oversaw the work of designers. Navarro was the creative and design lead for clients such as ING, Kit Kat, BMW, Puma, MINI and SPA. His work at JWT won a Grand Prix for Creative Data and a Grand Prix Cyber at Cannes Lions International Festival of Creativity in 2016.

Boonin comes from a background of building software products and teams from the ground up. Most recently, she was chief technology officer at Vela, a web-based platform that allows Etsy sellers to manage and edit their listings; and before that, she was chief technology officer at Rolltape, a social mobile app for sharing audio messages. Boonin describes herself as a veteran manager/leader, UX zealot, architect/coder, agile pioneer and crazy dog lady, and considers the term 'work-life balance' a false dichotomy.

“I’ve wanted to hire David for years, but he’s been smart enough to say no. Until now! His creative vision and passion are an inspiration to anyone that sees his work,” said Thorleifsson. “I can’t think of anyone better suited to lead the creative team in our NYC office. ¡Bienvenido, David!”

Thorleifsson added, “Elisabeth seems to be able to do everything. From the first time we met, I knew this was the person I wanted to lead our growing US development teams. I’m very excited to see how she will help our already-amazing developers create even better work. It’s a tall order, but I know she’s up for the challenge.”

Navarro will work on the Chubb, Facebook and Reuters accounts at Ueno, while Boonin will handle Chubb, Google, Uninterrupted and Uber. The agency’s other clients include ESPN, Airbnb, Dropbox, Apple, Visa, Fitbit, Verizon and Cisco.