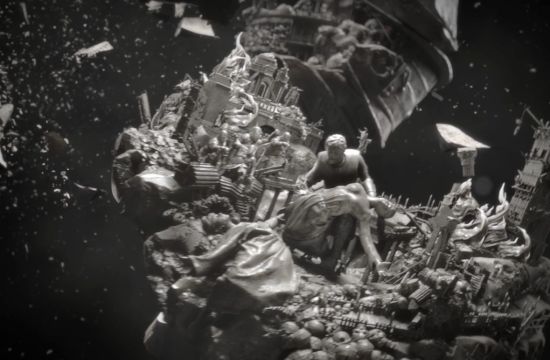 For the E3 Launch of the Xbox One flagship titled "RYSE: Son of Rome," twofifteenmccann turned to Ntropic to create the visual effects and production of the full CG experience. Set in an Imperial Rome that has descended into decadence corruption and violence, "RYSE: Son of Rome" tells the story of Marius - a soldier driven to fight for the Rome he believes in and loves. The trailer - titled "Explosion," depicts Marius' Rome and the game's fiction using characters carved into elaborate pieces of stone statuary moving through a mysterious void together and assembling themselves in a stunning reverse explosion choreography into the form of a statue of a hero. The stone renderings evoke classical high relief storytelling and sculptural forms like the Trevi Fountain.

“Finding a new way to tell a story about ancient Rome is a challenge to say the least. Ntropic and immaterial helped us develop an idea that was utterly unlike any we'd seen before, and then completely surpassed our expectations in the execution,” said James Robinson, Executive Creative Director, twofifteenmccann.

Teaming with conceptual artist Immaterial, Ntropic Creative Directors Andrew Sinagra and Nate Robinson, along with veteran Visual Effects EP Jim Riche and a team of modelers, animators, fx artists, and lighters worked closely with twofifteenmccann to create a world that both tells a story of the loss of Rome's greatness, and the greatest chance for its redemption in a single visual analogue.

"The hardest part of the project was physically managing the amount of detail that went into every fragment throughout the pipeline without setting any technical constraints on the creative," said Andrew Sinagra, Creative Director, Ntropic. "We wanted people to have to look closely, with the hope that viewers would watch several times, continually finding new elements and details in each story."

The execution was technically challenging from a design and construction point of view - artists working in Maya and Zbrush built all of the fragments and storytelling dioramas and teams at the agency and Immaterial guided the storytelling in the fragments themselves.

"I was excited to work on a game title launch project as a production company, having worked on so many of them as an agency person," said Tom Wright, Managing Director, Ntropic. "Xbox is some of the best conceptual work in the industry and the creative cultures of both twofifteenmccann and the gaming world are open enough that it's always an opportunity to do something wonderful. Which of course creates that awesome pressure to live up to that promise."

"Explosion" debuted at E3 and in its first week had 1.5 million views on YouTube alone.

"We're excited about RYSE - it's a perfect blend of what we love to do at Ntropic - which is to both innovate technically and contribute at a high level creatively," said Nathan Robinson, Founder and Creative Director, Ntropic.