The further adventures of Hellocomputer and Draftfcb's social media star 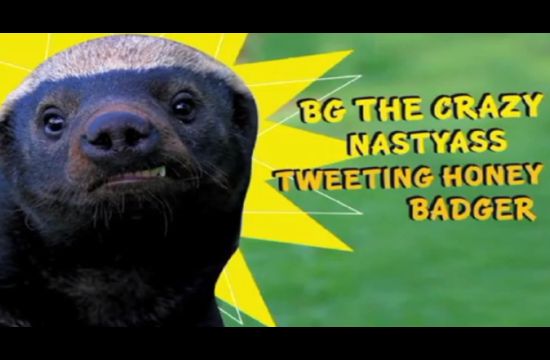 A relative newcomer to the social media scene, BG has nevertheless also enjoyed fame. He took the world by storm in June this year when he ‘took over the role’ of social media spokesperson for the Johannesburg Zoo. To date, BG has tweeted over 400 times.

In his most recent honey badger video, Randall uses his irreverent talents as a narrator to create a hilarious short documenting a day in BG’s life at the Johannesburg Zoo in South Africa.

But, while Randall gives the lowdown on BG’s habits and behaviours, he doesn’t share with you just how he live tweets.

This is achieved with the help of techno wizards Hellocomputer and BinarySpace, which rigged BG’s enclosure with wireless infrared motion sensors divided into six zones. These sensors talk to a server that holds a database of hundreds of pre-written BG tweets.

As BG moves from zone to zone, the motion sensors pick up on his location and automatically trigger tweets from his Twitter account, in real-time. Using built-from-scratch coding, they ensure the tweets are relevant to what he is doing at the time. For example, the front of enclosure triggers tweets relating to people, back and sides trigger tweets relating to neighbours, food bowl triggers tweets about eating etc.

He was introduced to the world by Hellocomputer and a campaign developed by its sister agency, Draftfcb South Africa.

Said Hellocomputer executive creative director, Kerry Friend: “We’re exceptionally proud of BG. He gained 5 000 followers in 50 tweets during the first week of his campaign and over 11 000 to date, trending on Twitter while doing so.

“He has also has garnered a strong international following, been on many major sites and blogs including Times Live, Huffington Post, NotCot, Best Ads on TV, BuzzFeed, TED and Perez Hilton, and made major press, radio and television appearances worldwide, including ABC News, Fox 2 and 6 and Good Morning America.

“We’re thrilled his talent was spotted by Randall and fully expect him to gain new followers as a result.

You can follow BG the Tweeting Honey Badger (or ‘South Africa’s Tweetheart’ – as the international community fondly refers to him) at @zootweetslive or #tweetingbadger. You can view him and his role as a twitterer here http://bit.ly/12iIcyO and you can read the full story of how he live tweets from his enclosure here: http://www.hellotruth.co.za/hot-new-work/the-worlds-first-live-tweeting-badger/.