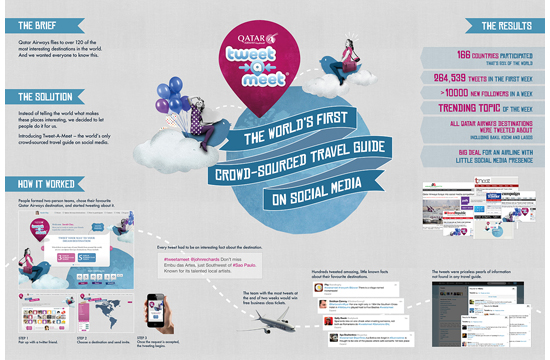 Grey Group Singapore was awarded a Silver Effie for its Qatar Airways “Tweet-a-Meet” campaign. The winning campaign beat one other agency in the “Travel/Tourism/Destination” category to secure top honours.

For the winning campaign, Qatar Airways paired up with Batey Singapore, a Grey Group company, to launch “Tweet-a-Meet”, the first Twitter race across the world by a global carrier. The campaign ran from April to May 2012 and invited teams of two to turn their virtual connections into real ones, by allowing them to convert their tweets into miles.

A separate micro-site (www.tweet-a-meet.com) was set up to allow users to connect it to their Twitter account. Participants selected a race companion from their Twitter list to join the race with and eventually meet in-person.  An invitation was sent to the chosen person through Twitter and their email. Upon acceptance of the contest invite, teammates selected one of Qatar Airways’ over 100 destinations as their meeting point.

The campaign was highly interactive, with participants’ progress charted virtually on their personalised flight routes. Every unique tweet about their selected destination moved them one mile closer to their goal. The first three pairs to cross the finishing line won a pair of business class tickets to one of Qatar Airways’ destinations of their choice.

“Tweet-a-Meet” was a massive success in boosting Qatar Airways’ social media presence. A total of 166 countries took part in “Tweet-a-Meet”, with one new tweet going out every second. A total of 264,539 tweets went out during the first week and Qatar Airways’ Twitter account gained more than 10,000 followers in a week. All Qatar Airways’ destinations were tweeted about, including Lagos, Baku and Kochi. Notably, the campaign’s hashtag, #tweetameet, was the trending topic of the week.

Subbaraju Alluri, CEO of Grey Group Singapore, says: “We are proud to have received an Effie for “Tweet-a-Meet”. Grey Group Singapore believes fully in the importance of digital advertising and we wanted to leverage on online global connectivity to create a truly interactive campaign.”