Digital agency developed the idea in partnership with truTV 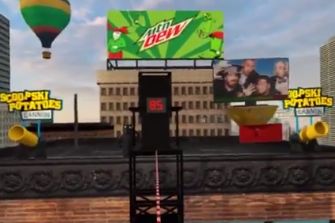 Fans of truTV’s hit series Impractical Jokers who visited truTV’s Impractical Jokers Block Party at Petco Park in San Diego at Comic Con had the opportunity to get a first-hand VR-experience walking a high wire, like the series hosts crossed during their 100th Episode Live Punishment (Season 4).

The VR Experience was built and created by digital agency TVGla who developed the idea in partnership with truTV as a way to give fans of the show the opportunity to step into the shoes of Sal, Q, Joe, and Murr, affectionately known as the Impractical Jokers.

“What makes this VR experience stand out is that it connects the fans directly to the show and an actual episode. It’s not VR for the sake of VR. This is authentic to the brand and the cast and gives fans a one-of-a-kind walk as everyone will walk through the tightrope in their own way,” said Dimitry Ioffe, CEO of TVGla.

The VR experience takes fans up in a virtual elevator 35 stories high where they were able to take in the city views and walk across a virtual high wire. They walked on a thin raised platform meant to simulate the feeling of the high wire under their feet giving fans the feeling that they are high in the air, while they are less than an inch off the ground.

As they step out onto the “wire,” the voice of Impractical Joker Brian “Q” Quinn (the only cast member to successfully complete the high wire challenge in the 100th Episode) talks fans through the experience, offering encouraging advice while other cast members heckle and taunt fans as they do to each other on the show.

Embedded in the walk are “Easter eggs” from the Impractical Jokers show that only fans will recognise. For example, to make the walk across the wire even more difficult, fans are pelted with virtual mashed (Scoopski) potatoes fired from canons on the rooftop across the street.