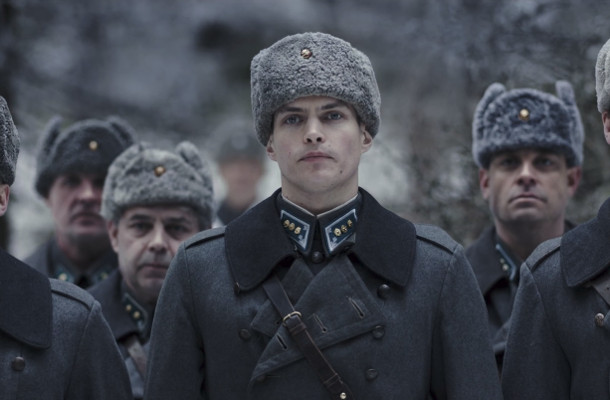 ‘The Unknown Soldier’ (‘Tuntematon Sotilas’) is an important film for Finland. Based on the beloved novel by Väinö Linna and directed by Aku Louhimies, it follows the lives of one Finnish machine gun company through more than three years of desperate struggle during the Finnish Continuation War (1941-44). The film tells the story of Rokka, Kariluoto, Koskela, Hietanen, and their brothers-in-arms as they fight to defend Finland’s independence from the encroaching Soviet Union. In the tradition of great war films, it taps into a situation of extreme adversity to celebrate the best of humanity - friendship, humour and the will to survive are prominent themes. And running for almost three hours, it’s unavoidably been described as an ‘epic’.
Released in its home nation in October 2017 to coincide with the unique Nordic country’s 100th anniversary, ‘The Unknown Soldier’ quickly demolished Finnish box office records, grossing more than €14 million. That beats Titanic, the nation’s second highest grossing film (which took €8 million), by some way. Unsurprisingly, there are mumurings that it will be the Finnish candidate for Best Foreign Picture at the next Oscars. “What else could it be?” asks Eka Ruola, CEO and CCO at Finnish ad agency hasan & partners. “This has to be the candidate.”

Aku and Eka have collaborated for years now on commercial projects, so when the idea to make a new adaptation of the novel (following one in 1955 and the second in 1985) became a possibility, the director knew who to call.

To make sure the movie was the lavish, Saving Private Ryan-esque blockbuster it needed to be, Aku knew he had some hurdles to jump. The production budget was €7.8 million. But trusting in hasan & partners he knew there was a way. “If we were going to touch this it meant it would be the most expensive Finnish-language film ever made,” says Eka, remembering the enormity of the challenge.

“We had quite a limited marketing budget,” says Aku, understated. Turning cap-in-hand to brands was a necessity to make this project happen and the director knew it. “It was always apparent that this size of film could not be done in Finland for such a small audience unless brands were involved.”

Everyone knows that product placement in films can be a bit rubbish. And as an advertising creative who takes pride in doing things differently, Eka knew they could do better. “Sometimes it’s done in a very relevant way,” he admits. “The product is actually part of the story - like a mobile phone can be - and sometimes it’s really clumsy, you can see that there’s a logo really visible for contractual reasons, which is, of course, boring as hell.”

Eka and hasan & partners already had an idea for an alternative though. It had been knocking around in the agency for a few years, he says, and this film project of a lifetime with long-time collaborator Aku was the perfect opportunity to make it a reality. As Eka puts it: “We did the upside-down thing. We made brands market the movie instead of using the movie to market themselves.”

Working with Aku, the agency built this idea into a partnership model they could take to potential partners. Drawing on the director’s experience in commercials, he would direct branded content around the making of the film that clients would be able to release as anticipation for the release built. Brands could also get involved in more practical ways, helping contribute to the film’s production itself, depending on what suited their products or services.

Everyone was anxious to make sure the tone was right. As arguably the most important intellectual property in the country, ‘The Unknown Soldier’ demanded respect. Also, it’s not the sort of story that fits with modern logos slapped all over it. “This is a war film” says Aku. “Sure, the message of it is quite pacifistic, but it’s still not the most obvious genre to pair your brand with.”

The brand partners wouldn’t appear in the film themselves. Despite the fact that it could leave a bad taste, many modern products would seem anachronistic in a 1940s setting. “We planned it so that when Aku and his team were shooting the film, we were able to produce branded content while making the movie. So the art was kept clean but we got content for brands to use in their campaigns before the movie premiered.”

It’s rare that brands get such an opportunity - an authentic chance to take part in a cultural event that they usually couldn’t participate in. This was a poignant artistic project, not an explode-y Michael Bay extravaganza.

Eka was pleased with how well clients responded to the idea. “Some brands said no to it, of course, but quite a few really bought into it when they saw how it worked,” he says. “We got some amazing brands - very important, big Finnish companies - involved.” From, household name food brands to Land Rover, they found the partners they needed to make the idea a reality.

“When they marketed the movie before the premiere, they turned that into a bigger phenomenon and at the same time made their connection to this historical piece more meaningful, deeper, more authentic,” says Eka. “It was a win-win-win.”

In the build-up to the release, retro product ads started emerging for FMCG partners, supporting special edition ‘Unknown’ products, acting as intriguing ad campaigns as well as effectively as trailers for the movie. One brand, Valio milk, even used their packaging as a way to access the trailer itself using augmented reality technology.

Land Rover, who didn’t exist until 1948, couldn’t have their cars featured in the movie, but made a huge contribution to its production by providing transport for cast, crew and equipment while shooting in unforgiving Finnish winter locations. This allowed them to release documentary behind-the-scenes footage about their part in the movie on social channels. The same went for national lottery company Veikkaus, who used their audience to cast the 3,000 extras Aku needed to create his epic.

Eka doesn’t really know what to call this inverted product placement model. “There is no definition, which is great,” he says. “There’s a poster at our daughter company Perfect Fools in Stockholm: ‘I like it. What is it?’ And if there’s no definition it’s fine, let’s do it anyway.”

He might not know what to call it, but he’s keen to take the model forward. He’d love to apply it to other movies (a Bond movie with Aku at the helm is the dream, he says), but stresses that it can be applied to other cultural events, such as art exhibitions or music festivals. “It can be done and I’m willing to do more of it.”

As for the movie, “the journey has just started,” says Aku. ‘The Unknown Soldier’ has already had its release in Finland, Sweden, Norway, Denmark and Estonia, and Aku’s confident it will reach more distant shores soon. And who knows? Fuelled by the power of open-minded brands and a trusting relationship between director and agency, Finland’s national story could find itself reaching a way more global audience than anyone expected.