Rightster takes vloggers around the world 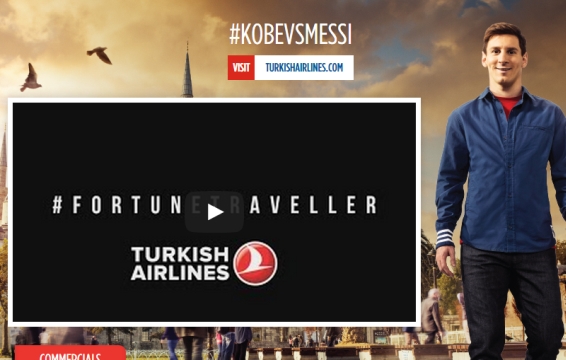 Turkish Airlines, who flies to more countries than any other airline in the world, today announces a partnership with Rightster, the cloud-based global video distribution and monetisation network that simplifies delivery to TV scale audiences in the complex online video market, to kick off a global YouTube campaign.

As YouTube’s most subscribed airline, Turkish Airlines has invested in a global project that will allow many of the world’s biggest YouTube stars to take part in its #FortuneTraveller initiative. The project involves flying stars such as Devin Supertramp , from the US with over 2.5m subscribers, and Damian Walters, from the UK with 475,000 subscribers, to Istanbul with just a passport and bag.

The deal was brokered and produced by Rightster and includes talent from 10 countries, across all the major global YouTube networks. The project underlies Turkish Airlines commitment to Google’s YouTube platform and highlights Rightster’s credentials as a network agnostic producer of branded entertainment.

Ian Samuel, Managing Director, Rightster Brand Solutions, commented: “We are delighted to partner with Turkish Airlines on such an ambitious project. We are offering the stars of tomorrow a unique opportunity of flying to not only Istanbul but to another secret location which could be anywhere in the world. For many this will be a once in a lifetime experience. Turkish Airlines are a truly innovative airline and the perfect fit for Rightster. With offices all over the world, Rightster can seamlessly activate the campaign both globally and locally.”

Neset Dereli, Interactive Marketing Manager at Turkish Airlines, added: “This partnership showcases the increasing importance of global YouTube network partnerships delivering long term success for brands on the platform. Bringing together creators from multiple networks and utilising Rightster’s expertise in creating branded content will mean we have the opportunity to reach a truly global audience.”

Inanc Emre Albayrak, Interactive Marketing Supervisor at Turkish Airlines, commented: “This new innovative campaign underlines our ongoing commitment to the YouTube platform and follows on from our phenomenally successful Kobe v Messi viral campaign. Rightster has deservedly become the largest YouTube multichannel network in Europe so it is a pleasure to be partnering with them and we look forward to watching the unique video content.”