Tunisian Harzas Duke It Out in Orange's Street Fighter-style Game 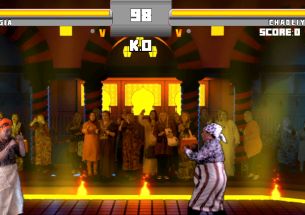 To demonstrate Orange’s 4G offering in Tunisia, FP7/McCann Tunis created a uniquely Tunisian retro-game with Tunisian street humour, inspired by the iconic Street Fighter game. The game features two Harzas (women working in a Turkish Bath also known as Hammam) in combat, and shows the speed of Orange’s 4G through fast-paced and entertaining gaming that worked at its best only on Orange. Try the game for yourself here.

Instead of objectifying women like some games do, FP7/McCann Tunis remained realistic. As a branded game, Hammam Fighter featured two Harzas as playable characters in an iconic showdown, each with their own humour, jibes, weapons (such as Sandals, Soaps and Sponges), and finishing moves such as The Slipper Smackdown, The Finger in the Eye, and The Towel Drop.

Online films shared their backstory and rivalry. Game demos, entertaining social posts and more encouraged participation. The Harzas even became the stars of Tunisia's Comic Con! Through gaming influencers, the idea engaged millions, trended across top media platforms (including Huffington Post in the region) and became the most shared hashtag by a brand in Tunisia.