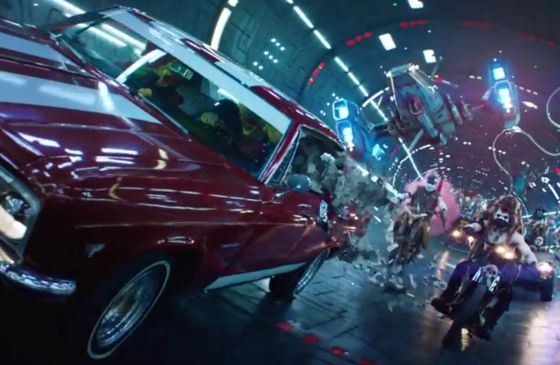 Virgin Media has today launched a major new campaign that brings to life the unparalleled entertainment that its customers enjoy through superior, ultrafast connectivity.

The multi-million pound campaign will run over 14 weeks across TV, online, print and OOH. The campaign launches first on social media, with the TV ad breaking today, Friday 24th March, during Coronation Street and Gogglebox.

The campaign, created by BBH London, celebrates the uniqueness of Virgin Media’s cables and all the great entertainment they are capable of delivering. Fast-paced and action packed, it depicts some of entertainment’s most loved genres racing down a gigantic, futuristic fibre cable. Set to the soundtrack of “Misirlou” by Dick Dale & The Del Tones, the film features cameo appearances from Usain Bolt, Iron Lord Hunter from Activision’s Destiny game, Southampton FC and Donatello from Nickelodeon’s Teenage Mutant Ninja Turtles. They’re racing to be first into our homes and onto our screens, because if entertainment could choose how it was delivered, it would choose Virgin Fibre.

Kerris Bright, Chief Marketing Officer at Virgin Media said: “Red hot is our north star for judging creativity and our new campaign delivers this in spades. If entertainment could choose its fibre – it would choose Virgin’s. And to make things simple we are calling our offer Virgin Fibre. Our campaign coincides with the launch of VIVID 300 – our top speed – and the refreshment of our bundles, so that now our entry speed will be VIVID 100 – we start where our competition stops.

The campaign is based on the insight that, due to its unrivalled fibre and Wi-Fi connection, Virgin Media is able to deliver a reliable and seamless entertainment experience, direct to the home. The high-energy film aims to remind viewers of this, demonstrating that Virgin Media is the fastest way to connected entertainment. It ends with the line, ‘The best entertainment deserves awesome wi-fi. This is Virgin Fibre’.

Carl Broadhurst, Creative Director at BBH London said: “Virgin Media's state-of-the-art ultrafast cable spends it's life buried underground. We wanted to shine a spotlight on the tech that streams entertainment into your home faster than anyone else. But how do you do a product demo in a 'Red Hot' Virgin way? You get Sam Brown, you build a set of Ben-Hur proportions and fill it with a cast of over 300 characters from the world of entertainment, that's how.”

The film was shot by award-winning director Sam Brown, through Rogue. An epic production, it was shot in a bespoke tunnel in Budapest spanning 200ft. It will be accompanied by print, online and social activity, planned and brought by Manning Gottlieb OMD.