Trunk's Cute Animation for 'Earthworm Heart' Has a Morbid Twist 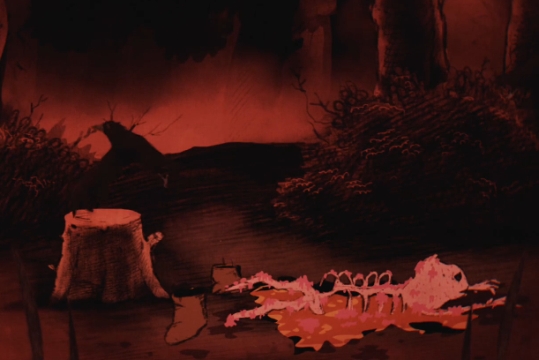 The Canadian based Tom Fun Orchestra and Trunk’s Alasdair + Jock have built up a great working relationship. This produced two fantastic multi award-winning videos from the bands previous album You Will Land With A Thud. Their beautiful new video is for the band's title track from their latest album Earthworm Heart.

Superbly dark with a wonderful streak of humour the video is a perfect accompaniment to the track. Jock's beautiful illustrative approach has echoes of Wind in the Willows and Beatrix Potter, a smooth soft style that gently rolls and bubbles with a subdued and subtle line boil.  The video was being worked on at the same time as Alasdair + Jock were creating their wonderfully received short Gelato Go Home! and the lyric video for Lilly Allen’s Air Balloon. In contrast to these works Earthworm Heart has a quiet palette and a more claustrophobic atmosphere. Alasdair notes, “ It was only natural that whilst we were working on a lot of bright and expansive work we wanted to create something that was a reaction to that.”

The idea for the short came from Hoffmann’s Struwwelpeter, The Story Of The Wild Huntsman. Alasdair explains, “rather than the traditional reversal of fortunes story we wanted to create a narrative that was more complex and less clear cut as to who was the hero or villain.” The short’s narrative is certainly more cyclical in nature than Hoffmann’s original. Without giving anything away, the clouds parting to expose a murder of crows against a glowing red hunter’s moon is one of the most beautiful and revealing shots in the short.

The video was created using a variety of software including Photoshop, After Effects, Flash and Cinema 4D. It was the first time that Alasdair + Jock created an animation entirely within the computer. Learning to build digital brushes that created just the right kind of feel that they required was an arduous yet rewarding process. Indeed as Jock observed  “ the experience and skills we learnt creating Earthworm Heart were invaluable when we created the animated album for Coldplay shortly after”.

The duo was also very lucky to be able to utilise the talents of a host of animators that filed through Trunk’s doors working on various jobs. When a job was being rendered or awaiting clearance these noble animators offered an hour here and there to help out. One of these was Fran Puerto Esteban who was on a sponsored internship through the Da Vinci program. He worked exclusively on the crow within the short, which enabled the character to retain a particular style and personality.

The video was greatly received by the band who had been most gracious in allowing Alasdair + Jock to use sound effects to alter their track when needed for the film's narrative. The talented people at Fonic once again worked with Trunk to ensure this process was conducted with sensitivity and great skill. Already the video has been selected for the International Music Video Festival awards in Paris, so let’s hope like its predecessors it also becomes an award winner.