The Sustainability Channel 169 Add to collection

Creative agency Impero takes tackling climate change into its own ‘paws’ with a no clients attached, Christmas charity campaign 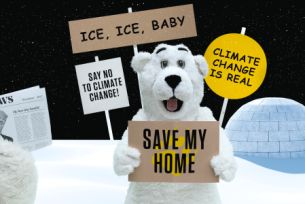 Climate change is certainly not ‘fake news’ – statistics for the near future look pretty bleak, as scientists predict that two-thirds of the world’s polar bears could disappear within the next ten years. Which is why Trump’s Xmas Meltdown, a retro arcade-style game developed by creative agency Impero, aims to give back and help raise money to save the polar bears – one of many beautiful species who stand to be destroyed as the ice caps continue to melt.

There is no doubt that 2017 has been a difficult year for the planet. Many of us have watched dumbfounded from the sidelines as, time and time again, certain world leaders made senseless decisions. One such decision was earlier in the year, when the US announced that it would be pulling out of the 2015 Paris Agreement on climate change.

At the summit, nearly all the world’s countries agreed that, “without action to greatly reduce CO2 emissions, the Earth’s temperature will be 4°C or more above the pre-industrial average by the end of the century, creating a climate no polar bear has ever known.” This agreement was made with the exception of the leader of the free world.

Whilst a mammoth issue to combat, Impero is doing its best to help, with the creation of Trump’s Xmas Meltdown – a game which allows players to task an adorable polar bear to, safely, give the world leader a taste of his own medicine. Using a series of melting techniques applied to an ice sculpture of Trump, Impero hopes to unite polar bear supporters to collectively help tackle climate change issues, by turning a negative into a positive through gamification and a bit of Christmassy humour.

One-hundred percent of the donations from Trump’s Xmas Meltdown, as well as an additional donation of £1,000 from Impero themselves, will go directly to Polar Bears International, the world's leading polar bear conservation organisation, in a charitable step that will help them to address the issues endangering the species.

On the campaign, Michael Scantlebury, Creative Director of Impero said, “This year, as an agency, we decided to give back, have some fun, and do some good for the planet. With flippant comments like, “where is climate change” and “global warming is an expensive hoax”, what hope will the polar bear population have in surviving the melting polar ice caps if we don't do something now, by trying to impact change wherever we can.”

Trump’s Xmas Meltdown plays host to five unique and quirky melting techniques unlocked via a donation mechanism; users can donate to the cause by visiting www.trumpsxmasmeltdown.co.uk, or going directly to the Just Giving page.