Eric brings his talents for mixing and sound design to the Dallas post studio, making it truly full service 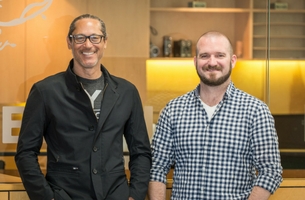 News of Jenkins’ hire and the audio expansion was announced by Tarter and Treehouse Executive Producer Jeremy Besser.

Jenkins (at right in the photo with Peter Tarter) was most recently an independent mixer and sound designer, working for a variety of post houses and ad agencies in the Dallas area.

A graduate of the University of Texas in Arlington, where he studied music and media, Jenkins has mixed commercials for HEB, Red Lobster, Pier 1, Home Depot, Sports Illustrated, Ford, McDonald’s, American Airlines, Baylor Hospital, Chili’s and other brands. He got his start as audio assistant at Video Post & Transfer and became a full-time mixer there before joining N20. He later was on staff at Fast Cuts. An accomplished pianist, Jenkins also tapped his music chops to create sound design and original music for spots as well as for feature film trailers.

“Eric is just a phenomenal talent,” says Tarter. “I’ve been in Dallas for eight years and been hearing about him since day one. When you work with Eric, you walk into the room and the session is already done – he’s that fast and that thorough. Creatives and producers love it, as all they need do is focus on the fine points and making it perfect. I was psyched to hear that he wanted to find a permanent base and jumped on it.”

Jenkins has been the resident audio mixer at a post house before and says being in this position can benefit both the clients and the work. “The advantage of having audio capabilities is that it helps clients realise the bigger picture, giving them get a complete sense of the piece earlier on in the process,” he points out. “Levelling out the voice and mixing in sound design and music helps a lot during the initial phase of a cut. It’s great because we’re that much closer to a finalised piece, and can tweak from there.”

Having worked for all the major agencies in the Dallas area – and with many of the market’s top post houses – Jenkins brings a wealth of experience to Treehouse. “All the post companies based here are one-stop shops,” he notes, “so I was extremely happy when Treehouse added audio and reached out to me to join the team.”

Indeed, Treehouse’s expansion – of which Jenkins is just part of the story – has been the result of steady growth since its launch in 2012. They’ve added additional offline rooms, two Flame suites, a graphics suite and a client lounge. Their work for advertising clients includes such brands as Home Depot, HEB, Jeep, RAM Trucks, 7UP, Alfa Romeo, Famous Footwear, Go RVing, Toyota and Ulta Cosmetics, among others. The studio also provides editorial and post for digital content and independent films.

Tarter notes that Jenkins’ arrival means more than just adding audio to the mix at Treehouse. “We redid our entire facility, and we’ve created what I think is a great vibe, not just for clients but for our people too,” he notes. “Eric’s going to be a big part of that. Having him here makes us truly full-service, which will help our agency clients, who no longer need to go elsewhere for audio mix or sound design.

“On top of that, we want to work with cool, levelheaded people who have lots of interesting things going on, and that defines Eric,” Tarter continues. “He’s a Renaissance man who’s into so many different things. Having him here makes me very happy.”