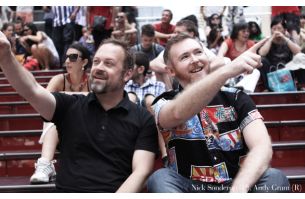 In an ongoing effort to bolster its creative leadership team, Translation has added creative director duo Nick Sonderup and Andy Grant to its roster. The new arrivals mark the first major creative hires under the tenure of CCO John Norman and ECDs Jay Berry and Marc d’Avignon, who were brought on board in early 2014 to spark a new era of creative excellence for the agency. Sonderup and Grant will focus their work primarily on the agency’s State Farm initiatives, having already contributed to the launch of the inaugural State Farm Neighborhood Sessions—a philanthropic concert spotlighting pop icon Jennifer Lopez in her hometown of the Bronx.

“This is an exciting year for Translation,” notes CCO John Norman. “This summer alone, we’ve delivered some of our funniest work to date with a standout campaign for American Signature’s Value City Furniture brand, and created our first work for Champs Sports with  “Game Never Sleeps,” having been named their Agency of Record earlier in the year. This is only the beginning of a bold new direction for the agency, and strengthening our creative resources will be a top priority as we prepare to tackle our next big projects.”

Sonderup comes to Translation following a three-year run at BBDO, and nearly five years at Wieden + Kennedy before that – having begun his career in earnest as a writer at MTV Networks. A copywriter by trade, he has delivered his unique style of wordsmithery for several top brands, including GE, ESPN, American Red Cross, Starbucks, Sharp and MTV. His work has been distinguished with AICP, Art Director’s Club, ANDY, One Show, Effie, and ADDY awards, just to name a few, and his contributions to GE’s acclaimed “Childlike Imagination” helped the spot to earn a nomination for Outstanding Commercial at the 2014 Emmy Awards. Sonderup has also deployed his talents across numerous projects beyond the advertising industry, serving as the Creative Director of the inaugural Woodstock Comedy Festival in 2013, and creating the documentary “100 Bands in 100 Days,” which premiered at SXSW 2011.

Grant joins Translation from Crispin Porter + Bogusky, where he helped to create one of the most-viewed commercials of all time, “The Selfie Shootout,” starring Kobe Bryant and Lionel Messi, and boasting over 138 million YouTube views.  An advertising veteran of 14 years, Grant has spent significant time working in offices all over the world. Prior to moving to Los Angeles for his role at CP+B, he enjoyed stints as an ACD and Art Director at a number of top international shops, including BBH Singapore, WCRS London, TBWA\Hunt\Lascaris Johannesburg, Ogilvy Prague, and more.

“Andy and Nick are two creatives who know how to deliver on big ideas,” notes Founder/CEO Steve Stoute. “Translation has spent a decade as the scrappy underdog, proving time and again that it can go head to head with the biggest agencies out there. Now we’re investing in the sort of talent that will take this agency to a whole new level.”