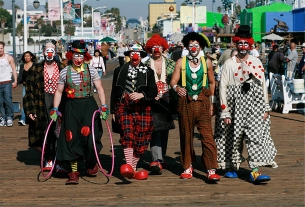 Rattling Stick has signed the illustrious, multi-award-winning directing collective Traktor to its portfolio.

Traktor, previously signed to Partizan, is behind a multitude of critically acclaimed music videos and commercials, including hits like Basement Jaxx, “Where’s your Head At” up to recent work such as Heineken “The City”, Three’s “Sing it Kitty" and the “Booking.com” series.

Rattling Stick will now represent Traktor in the UK and the US.

Traktor won an Emmy for FedEx “Sticks” and two Grand Prix at Cannes - for Diesel Jeans and Fox Sports. The directors have won a total of 23 Lions at Cannes, been nominated for a Grammy and Emmy-nominated five times.

Traktor directed the Basement Jaxx  “Where’s your Head At”, the Fatboy Slim ‘Ya Mama’ video and The Prodigy’s ‘Baby’s Got A Temper’.

Daniel Kleinman, director and co-founder of Rattling Stick, said: “Rattling Stick and Traktor have a very similar mentality and outlook, the desire to do great work, push the boundaries and put quality first. Innovation and experience is what you get, freshness of outlook from nice people who know what they are doing. It’s a great mutually beneficial fit that broadens the pool of amazing talent and facial hair represented by Rattling Stick in the UK and the US.”

Ringan Ledwidge, director and co-founder of Rattling Stick, said: “Rattling Stick and Traktor share so many consonants, working together was just meant to be. Joking aside, most production companies would rip their arm off to be in cohorts with Traktor, their talent, work and reputation are pretty bloody great. We share very similar philosophies and the prospect of creating, working and having fun with them is something I believe will inspire both sides. Expect a Cannes swimwear range (with accessories) for Summer 2016.”

Traktor, director, said: “Throughout history there are certain unions that transcend language and become more than the sum of their parts: Schleswig-Holstein. Siegfried & Roy. Dover Calais. This is not one of them. This is simply a good old fashioned sight gag (Rattling Traktor, get it?) and some childish excitement at the matching pair of Grand Prix from Cannes. Roar! Life is short and fun is long. We'll be in the Sauna if you need us. Together.”