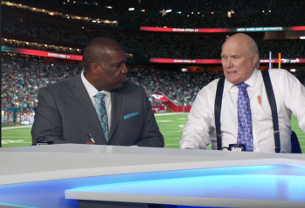 It’s been just over year since the clever folk at directing collective Traktor decided to join the equally nifty team at Rattling Stick. Over the past 25 years, Traktor (a.k.a directors Mats Lindberg, Sam Larsson, Pontus Lowenhielm, Patrik von Krusenstjerna, Ole Sanders and producer Richard Ulfvengren) have been at the forefront of creative filmmaking, crafting some those years’ best-loved music videos and commercials – and their first year with the Rattling Stick crew has been no different. With campaigns for FIFA and Wieden+Kennedy, Virgin Media and BBH, and a whole host more under their belt, the team marked their first Rattling Stick birthday with not one, but two Super Bowl commercials. The first was for GoDaddy, a brand with a big history of Super Bowl presence, while the other was for Tide and featured a fully live, real-time element - no small feat on the world’s biggest broadcast stage.

LBB’s Addison Capper caught up with the team at Traktor to pick their brains on the highlights of the past year, find out more about the recent Super Bowl work, and to see what’s in store for the year ahead...

LBB> One year at Rattling Stick! How would you sum up that first year?

Traktor> We’ve had a blast. We’ve been busy. We’ve been dancing. Sometimes at the same time. A match made in heaven (or rather in Kaffeine on Eastcastle Street).

LBB> You’ve worked on some pretty wicked things over that year… FIFA with W+KAmsterdam, Virgin Media with BBH, Nescafé’s Swooshy Man with Publicis, etc. What’s been the highlight for you?

Traktor> Highlights are subjective. Sometimes the experience is a thrill ride and sometimes it’s a complete pain, yet ending in a fun result. We love that we were up and running on Virgin Trains three days after joining Rattling Stick and we love that we started the second Rattling year with two Super Bowl spots. The adventure continues and now with a strengthened American chapter. Come by for a Margarita on Fridays.

Traktor> Super Bowl spots tend to eat up the whole of Christmas but that’s a small price to pay. There’s a glorious sense of Force Majeure that gets everybody extra excited. Things tend to fall in place easier when you drop the S-word. We’re watching it at Zinque. Drinks on Richard.

LBB> I LOVE the use of Rick Astley in the GoDaddy spot - what inspired that? Were there any other tunes in the running?

Traktor> Not really. It was in the script from Day 1. And it’s on our playlist for the party. No requests!

LBB> Also, that Golf Cabriolet (or what looks like one anyway) is brilliantly retro - what kind of aesthetic were you aiming for with the overall ad?

Traktor> The world of the Internet is a warm, charming and inviting place. Familiar and odd at the same time. Something borrowed, something blue… And now something yellow.

LBB> There are heaps of hidden gags within the film - can you reveal them? What inspired each little nugget?

Traktor> We had communal dossiers aplenty full of internetty trinkets, large and small. We wanted, however, to make sure that those details were there, without making it a twee puzzle. The foreground action should delight, while the details are there for those who pick up on them (and when they do they tend to emit a swift guttural gargle of dopamine. We like dopamine!). The Internet has a lot to answer for. And now you know where he lives!

LBB> The work for Tide is a real biggy! A traditional commercial with a fully live, real-time element that’s going down on game day with one of the commentators. Tell us what you were thinking when this job came in?

Traktor> We thought: “Thank you very much America. We’d love to be part of that!”

LBB> How did it go on the night? Do you have any stories for us?

Traktor> Because when we shot it, there were still eight permutations of teams and jerseys we had to shoot every scene with football action eight times. Meaning we could only use 12.5% of the rushes to start shaping the action once the final teams (and who would have home-field!) was determined. It rained and rained and rained. But who’s counting. We come from the snow!

Traktor> We had plenty of good guidance from the pros at NFL and Fox. They do this blindfolded so we donned their blindfolds and drank (mint tea) to forget. The creatives from Saatchi & Saatchi know their (American) football and kept us on our toes.

LBB> How did you wind down after that shoot?!

Traktor> We are still winding. Adrenaline coupled with night-shoots takes its American toll. We’ll sleep on the plane.

LBB> From times when you weren’t on set, what have been your fondest memories with your new adopted family?

Traktor> The tradition of frequenting Blanchette on D’Arblay Street [in London’s Soho] after (or during) work is filled with tingling memories. The Star & Garter doesn’t know what hit it. Or the Star & Grater as Richard thinks it’s called. The Rattling Stick anniversary party was a hoot. And who doesn’t love a hoot!

LBB> What’s in store for the year ahead? Are there any types of jobs that you’d specifically love to get involved in?

Traktor> We are already up and running on two UK jobs, and look forward to balancing that out with some high quality wit and wanderlust on the American line 2. We’d love to do a DirectTV commercial, but don’t tell anyone.