Toyota's Sing-song Comedy Prank Will Have You Laughing Along 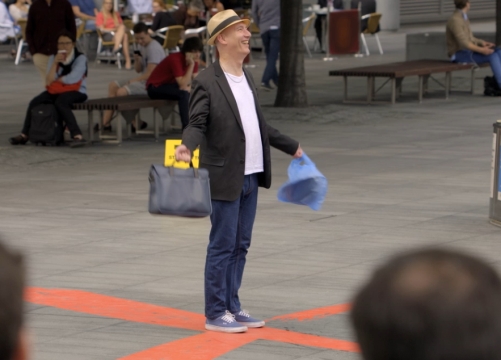 ‘X Marks the Spot’ features a giant version of the X shape that appears on the front of the all new AYGO, which was laid on the ground at Spitalfields market, London, with four musical comedians (Tom Livingston, Tom Houghton, Dylan Townley and Chris Turner) concealed nearby in the new Toyota AYGO.

Using multiple hidden cameras, microphones and speakers the comedians targeted anyone who walked over the 'X' with an improvised version of their very own song – one, for example, asks two builders to romantically share a sausage roll.

The work is part of Toyota's co-created 'Go Fun Yourself' platform of fun, which teams up with online pranksters, comedians, improv actors and YouTube stars to create content across European markets that is designed to reach out to a younger audience.

Further creative executions and additional social activity with other pranksters is planned  across the year and will be hosted on Toyota.co.uk , Toyota’s YouTube channel and their social channels.

Jemma Shaw, marketing communications specialist at Toyota GB Says: "X Marks the Spot has really bought to life the attitude of the AYGO in fun and engaging way. This is a great continuation of the ‘Go Fun Yourself’ campaign launched in July and will form part of our always on social and digital content plan throughout the year"

Paul Silburn, chief creative officer, Saatchi & Saatchi London Group says: "The X is a distinguishing feature of the new AYGO so we wanted to use it as a clear sign of where fun can happen"