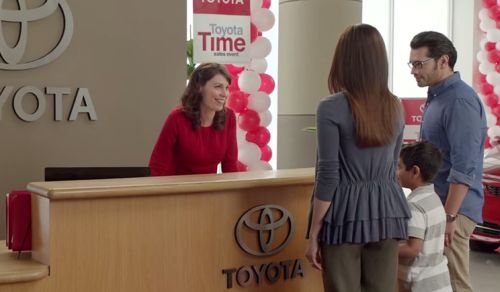 Toyota’s trusted, friendly, and engaging receptionist, “Jan” may be trading in her RAV4 for a roomier Highlander!  Actor, Laurel Coppock, who plays “Jan”, the face of Toyota’s Sales Event commercials is taking on a new role; playing a mom-to-be both onscreen AND off.

So what does one do when the star of a successful campaign reveals she’s pregnant?  Rather than hide the fact in shooting, or simply leave Coppock’s character out of the newest spots, Toyota and their agency of record, Saatchi & Saatchi LA, have embraced the pregnancy of their beloved character and written it into the script.  Toyota and Saatchi agreed that there was a natural opportunity to integrate Coppock’s pregnancy into the “Jan” storyline in such a way that was true to her character – the campaign will hit just in time for Mother’s Day.

Toyota carefully selected Coppock nearly two years ago after engaging close to 5,000 of its customers through a combination of focus groups and large-scale studies, and screening almost 500 actors for the part. Since the initial launch in December of 2012, the campaign has been effective in developing “Jan”, the trusted and relatable character, dedicated to helping shoppers find exactly what they’re looking for.