Toyota Tundra Has a Mud Bath 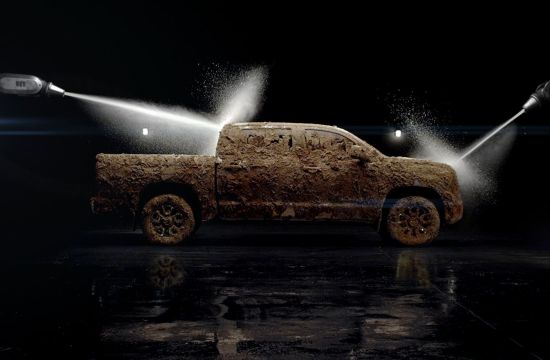 Visual effects and creative studio Ntropic recently teamed up with Toyota and production company Market Films to create “Reveal,” a 30-second spot for the Toyota Tundra. Directed by Ntropic’s Nathan Robinson and Andrew Sinagra, the spot shows a pair of robotic arms power-washing a mud-covered Tundra until the vehicle is “revealed” in all its pristine perfection.

In just nine days, the Ntropic team shot, edited, and created all of the visual effects, CG, and color work to round out a spot that shows both the gritty and elegant sides of the full-sized pickup truck. Bringing in a museum-seeming elegance to counterbalance the mud-encrusted truck, Ntropic artists worked in Flame to clean up the plates, CG and water elements.  The water-spraying robotic arms were created in CG to replace the massive power hoses that were shot in-camera on stage.

“We love simple ideas,” says Robinson. “The agency had a great concept that played out in a single setting and revealed the Tundra in both its beauty and its ruggedness. The spot allows the new Tundra to be the star without apology. It was also exciting to create the world’s most technically advanced robot car wash.”

“It was refreshing to get to do the exact opposite of what I’d want to do with the Tundra,” says Sinagra. ”When I think of the Tundra, I think of driving it up and down hills and through the mud. Cleaning it to the point of perfection definitely played into our obsessive-compulsive instincts.”