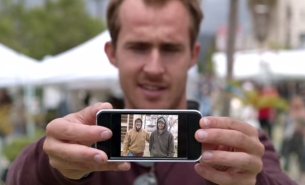 In an effort to connect with consumers in meaningful and relevant ways this Father’s Day, Toyota and Saatchi LA are collaborating to give dads the appreciation they deserve, setting out to literally bring families together for Father’s Day.

Toyota and Saatchi LA began by scouring the streets of Los Angeles asking people what they got their dad for Father’s Day last year. Many admitted to giving a terrible gift they put little thought into, while several others confessed to giving no gift at all.

As the filming for the project wrapped, Toyota selected one subject interviewed during the campaign, and brought him home to Wyoming to surprise to his dad. They documented the trip on film, from taking off in a plane to delivering him home in a Camry.

The campaign builds on Toyota’s continued efforts to draw awareness around the importance of fostering close connections with dad’s everywhere across the country. During this year’s Super Bowl campaign for the Bold 2015 Camry, Toyota honored one dad’s love for his daughter by showing how the Camry was there for all of those cherished memories.