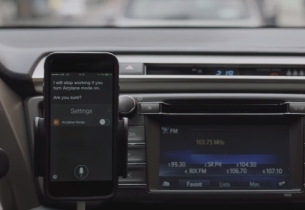 Saatchi & Saatchi in Sweden has launched a new campaign for Toyota – A SIRIous Message.  The new radio ad, which aims to eliminate distraction from safe driving - has a conversation with the phone via the ‘Hey Siri’ function to turn the airplane mode on, as long the phone is plugged in.

The campaign aims to tackle a problem on Swedish roads - mobile phone use in cars.  In fact it’s a current problem across the world. For example, one in four accidents are caused by mobile phone use in the USA and Great Britain.  Previous Government and media campaigns have tried to discourage drivers from using their phone whilst driving, but the ping of a text is far too tempting for some, so the best thing is to turn the phone off!

Jason Mendes Nordic ECD says: "If you ask people to turn off their phones in a cinema, they will, but ask them to turn it off in a car and surprisingly they don’t. Go figure.  So it’s understandable why Toyota went to this extreme to make the point.”

And that point from Toyota is very clear – either switch off your phone when driving or drive a car that is equipped with technology to diffuse phone distractions – which Toyota offers on all their new cars with their Touch and Go system.

Jan Casserlov, Communication Manager from Toyota Sweden says: "We take safety very seriously at Toyota so this was an exciting way to use new technology and thus bring out an important safety message to make an important point.“

Regner Lotz, Creative Director from Saatchi also added: “We believe this is a worlds first – where an ad talks and interacts with a mobile phone without any human interaction whatsoever.”

Two separate ads ran at rush hour – one for Apple Siri and the other for Google Android - the week before the holidays when most of Sweden migrate to their summer houses and the roads are full of cars.